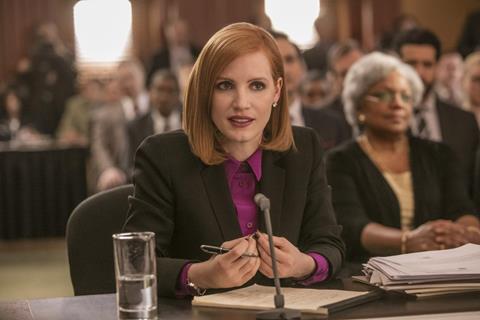 Charting the journey of a ruthless lobbyist who develops a conscience, Miss Sloane is a shallow but lively thriller which becomes undermined by its makers’ misplaced belief in the profundity of their topical tale.

By the time Chastain delivers an on-the-nose speech about how rotten Washington politics are, Miss Sloane has revealed itself to want it both ways

The latest from director John Madden (Shakespeare In Love) has its fair share of wild twists and juicy political strategising, not to mention an entertainingly chilly performance from Jessica Chastain. But for all its superficial pleasures, Miss Sloane is entirely too enamoured with its unconvincing air of insider-y intrigue, resulting only in pat lessons about the corrupting influence of money in government.

After premiering at AFI Fest, this EuropaCorp release will arrive in select US cities on November 25, hoping to land two-time Oscar-nominee Chastain some awards consideration. Miss Sloane should appeal to adult audiences, especially those who can’t get enough of Beltway television dramas such as House Of Cards and Scandal, and a supporting cast that includes Mark Strong, Gugu Mbatha-Raw and John Lithgow will only sweeten the deal.

Chastain plays Elizabeth Sloane, a powerful, feared lobbyist who is part of an influential Washington, D.C. firm which is paid to persuade congressmen to pass legislation that is beneficial to its wealthy special-interest clients. But when she’s approached by a non-profit run by an idealist named Rodolfo Vittorio Schmidt (Strong) to advocate for a law that imposes stricter gun-control measures, Sloane quits the firm to throw her weight behind a cause in which she believes.

Reuniting with Madden, with whom she worked on The Debt, Chastain gives Sloane the same kind of steeliness that she provided in Zero Dark Thirty and A Most Violent Year. As before, she proves adroit at playing a woman whose unapologetic ambition deeply unnerves the men around her, signalling a sexism which her character tackles head-on. No surprise, then, that Sloane is most captivating when she deftly outsmarts her opponents — particularly, the men of her old firm (including Michael Stuhlbarg and Sam Waterston) who are working to kill the gun law.

Emphasising tart dialogue and giddy one-upsmanship as the two sides finagle to secure the necessary votes, Miss Sloane positions itself as a frank, sleek depiction of how lobbyists have perverted American democracy and allowed moneyed interests (such as gun manufacturers) to dominate the legislative agenda. But Jonathan Perera’s glib screenplay doesn’t offer much insight into the machinations of government — and it’s not much better when it comes to revealing the cracks that start to form in Sloane’s seemingly indestructible armour.

The chief problem is that, despite how much Miss Sloane establishes how unscrupulous a lobbyist its anti-hero is - willing to do anything to win - the character is only rarely so shocking in her behaviour that we’re blindsided by her actions. In part, this is because viewers have become accustomed to Washington corruption in TV shows like House Of Cards and Veep, which are populated with fascinatingly horrible characters.

As tightly controlled and imposing as Chastain is, Sloane never seems unparalleled as a diabolical, unethical monster, even when she’s fighting for the proverbial little guy with this gun legislation.

Consequently, when Miss Sloane becomes a predictable redemption story in which our flawed protagonist starts to question her Machiavellian attitude, the transformation doesn’t feel very compelling. Plus, because the filmmakers spend a lot of time insisting that Sloane is impeccably calculating, it’s frustrating that the movie allows her to make foolish decisions — such as befriending and confiding in her male escort (Jake Lacy) — that will conveniently complicate her quest to get the law passed.

By the time Chastain delivers an impassioned, on-the-nose speech near the end about how rotten Washington politics are, Miss Sloane has revealed itself to want it both ways: ladling out increasingly far-fetched double-crosses while also attempting to be a hard-edged, realistic look at America’s lobbying crisis. Neither approach fully works.

Strong is nicely understated as a gun-legislation advocate, but his character is mostly meant to be a figure of moral decency that stands in opposition to Sloane’s scheming. (But here again, Miss Sloane reveals a naiveté that seems out of keeping with its milieu: can Schmidt really be that aghast about her questionable tactics given he knew her reputation?) Much better is Mbatha-Raw as a savvy young colleague who Sloane takes under her wing. Unfortunately, she, too, largely functions as a gauge to measure Sloane’s less-than-riveting ethical development.