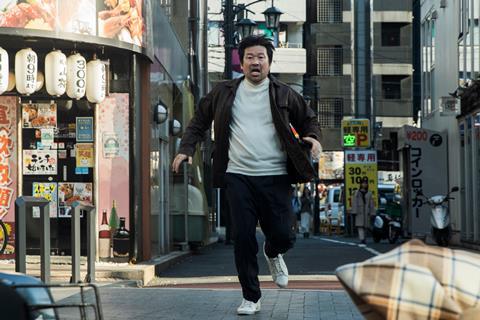 Following the death of his wife, Santoshi (Jiro Sato) has sunk into depression and debt, much to the consternation of his daughter, high school student Kaede (Aoi Ito). But Santoshi sees a way to claw his way out of his downward spiral once he spots a man who he believes to be “No name,” a wanted serial killer with a substantial reward on his head. When his daughter wakes the next morning, her father is gone, his phone is turned off. She fears the worst, but as Missing reveals with a looping timeline, the truth is more complicated than she could ever suspect.

This is an ambitiously layered thriller but also an uneven and occasionally far-fetched one. The credibility of the plot is stretched along with the running time; some of the twists and revelations are as likely to undermine the storytelling as they are to bring clarity to it.

Missing is Katayama Shinzo’s second film, following Siblings Of The Cape, which played at the Tokyo, Goteborg and Taipei film festivals and won Best Picture at the Skip City International D-Cinema Festival in Kawaguchi, Japan. Katayama cut his teeth working with Bong Joon-ho — he served as an assistant director on Tokyo! and Mother — and there is a tonal kinship with Bong’s work in the film’s blend of intimate, unassuming domestic details and searing bursts of violence. Further festival screenings are a possibility, but without a tighter edit, the picture might struggle to make an impact in the arthouse market.

The film is effectively divided into three sections, the first — and strongest — of which is told from Kaede’s point of view. She’s a child who has been forced, by the death of her mother and the general uselessness of her father, to grow up quickly. But she is still a child, a point which is driven home by the stamping tantrum she throws at one point — and by the fact that she seems to have little comprehension of personal danger.

The evidence, she believes, points to the fact that her father has been abducted, or worse, and the killer (a creepy Hiroya Shimizu) has stolen his identity. With the cheekbones of a boy-band frontman, but a reptilian glaze to his eyes, Shimizu plays the role as an apex predator. His laugh when Kaede pursues him and lashes out with her harmless schoolgirl fists is thoroughly chilling, as is the way he almost lazily pushes her to the ground and starts to squeeze the life out of her, only to be interrupted by a passerby.

The second section winds back three months and is told, predominantly, from the point of view of the killer. The third takes place 13 months before, and focuses on Santoshi as he nurses a wife who is so severely ill with ALS that she begs him to help her end her life.

It’s in this section that Katayama loses some of his tight grip on the direction. The skittering jazz drums, which brought a breathless energy to Kaede’s story, give way to a more generic sad piano; the credible desperation of the film’s early sections is replaced by some unlikely decisions on the part of key characters. The pace of the storytelling slows, tangled up in the exposition. But then, at the very end, Missing redeems itself with an audacious confrontation, which plays out between two characters who are conversing while simultaneously playing a three-minute unbroken ping-pong volley.