Peter Jackson steps behind this potential new YA dystopian franchise 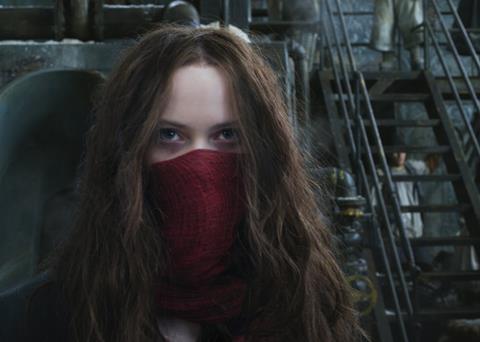 With Mortal Engines, producer/co-writer Peter Jackson steps into a steampunk vision of London, where the mobile city roves around a desolated Europe on giant wheels. The Lord of the Rings filmmaker hands directorial duties over to experienced crewmember and Oscar-winning King Kong visual effects artist Christian Rivers, who has clearly learned his mentor’s world-building methods. Adapting the first title in Philip Reeve’s four-novel series, this Wingnut-produced post-apocalyptic adventure is rendered with intricate, eye-catching detail. Yet although the craft is coupled with a scenario featuring ample initial intrigue, the New Zealand-shot film remains frustratingly generic.

Opening in select territories from December 5 ahead of a December 14 bow in the US and UK, Mortal Engines is a Frankenstein’s monster of a sci-fi/fantasy epic. Mary Shelley’s creation ranks among its influences, alongside Mad Max, Star Wars, The Terminator and Jackson’s own Tolkien adaptations. Jackson’s name holds plenty of weight, but whether it can catapult this mixed effort to box office success will prove a considerable test, especially with Hugo Weaving ranking as the film’s sole high-profile star.

Drama arrives via Hester Shaw (Icelandic actress Hera Hilmar), who, with a livid scar across her face, is weighed down by personal tragedy yet handy with a blade. When her town is ravaged by London, she seizes the chance to settle an old score with Valentine. Her actions are thwarted by eager trainee historian Tom Natsworthy (Robert Sheehan), an orphaned life-long resident of the moving city who dreams of taking to the air one day. A chase ensues, but when Hester reveals Valentine’s savage past, Tom is left for dead in the muddy plains with only the mysterious young woman for company.

Co-scripted by Jackson with regular collaborators Fran Walsh and Philippa Boyens, Mortal Engines takes its central duo through a string of episodic incidents which serve to extend their collision course with Valentine, although a climactic confrontation is never in doubt. The journey here is more interesting than the ultimate destination, filled as it is with scurrying mechanical hamlets, human trading auctions, a rebellious ‘anti-traction’ league led by aviatrix Anna Fang (Jihae), and part-man, part-robot Shrike (Stephen Lang), a literal killing machine which has raised Hester.

With stellar assistance from his effects team and art department, debut director Rivers brings the film - and potential franchise - to life with an organic, lived-in sheen. CGI may be intertwined in its mechanised cities, razed wastelands and battling airships, but this is a world that looks authentic, and that viewers will want to spend more time in. Rivers’ young, mostly unknown cast also earns the audience’s investment, with Hilmar making Hester a compelling heroine who boasts a convincing rapport with the charismatic Irish actor Sheehan. South Korean musician Jihae and Australian newcomer Leila George (as Valentine’s initially loyal, quickly suspicious daughter) similarly leave an imprint, while veteran Lang brings pathos to his complicated automaton.

Although the story tries to elicit the same response, its overall beats, themes, twists and romantic subplots simply prove too routine — well-worn, even for the movie’s younger target demographic, rather than classic. That said, Mortal Engines crucially takes the time to flesh out a self-contained story. Its narrative may remain inescapably familiar but, unlike many other wannabe franchise-starters, it never feels like mere sequel-bait.