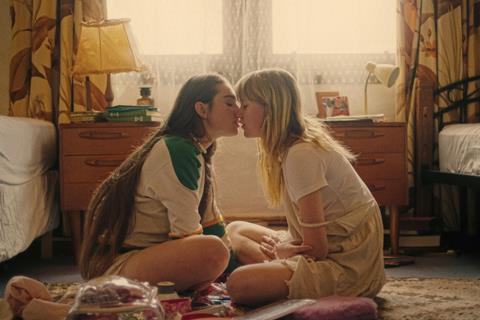 The death of her mother leaves sheltered 16 year-old Claudia (Markella Kavenagh) traumatised and vulnerable, alone with her dog in an isolated single-storey cottage far away from the creep of civilisation and small town life. But civilisation finds her nevertheless – Grace (Maiah Stewardson) witnessed the incident that claimed the life of Claudia’s mother and seeks her out to check on her wellbeing. The connection between the two young women is instant and intense. Claudia discovers the joys of the world beyond the four walls of her house and the woodlands on her doorstep; both discover a pleasure in each other. But their shared idyll is on borrowed time, in this gentle little coming of age story and romance which is as sweetly pastel-hue as the strawberry milk and marshmallows which form the girls’ staple diet.

The first feature from Katie Found, who won an Australian Writers Guild award for her screenplay for It Will Peck You in 2016, this is a picture which will likely play best with a young female audience. Having premiered at the Adelaide Film Festival and now screening in Flare, it could go on to enjoy further festival exposure, most likely within LGBTQ-themed events.

There’s an intriguing darkness at the outset of this story, a rumble of dysfunction in the relationship between Claudia and her mother (Edwina Wren), a novelist and eccentric recluse who taught her daughter that there is “nothing but pain” in the world beyond their isolated existence. Her mother had so successfully protected Claudia  that when she dies, in a deliberate incident which nearly claims her daughter’s life as well, the authorities are not even aware of Claudia’s existence. But the parallels with Yorgos Lanthimos’s Dogtooth soon dissolve like spun sugar as the film becomes beguiled by the connection between the two girls.

Found leans heavily on the use of colour when it comes to exploring the impact of Grace on the life of Claudia. Clad in a candy pink tutu, with a wardrobe that seems to consist mainly of zinging extravert primaries and plastic jewellery, Grace injects a burst of energy and positivity into the washed-out sadness of Claudia’s home. Stewardson is a charismatic presence, who seems more at ease in her role than Kavenagh (Romper Stomper)  as the damaged and introspective Claudia. With its sugary confection of a colour palette and warm magic-hour glow, the insular friendship which blossoms between the pair is shown as something to be treasured, but also, perhaps, something transient, which may soon lose its bloom as the summer passes. A screenplay which could, perhaps, have been further developed, is padded out with several montages set to a score which twinkles like Grace’s glitter eyeshadow.

The adult world is represented by a pair of concerned but lackadaisical cops who are rather laid back about the death by suicide of Claudia’s mother. Grace’s mother, meanwhile, is a stridently one-note antagonist with an emotional register which is stuck somewhere between rage and bitterness. And then there’s Claudia’s late mother, who appears to her daughter to dispense prickles of guilt about the pleasure she has found in her relationship with Grace. The love nutured between the two girls feels all the more precarious when juxtaposed with the uncaring world around them.