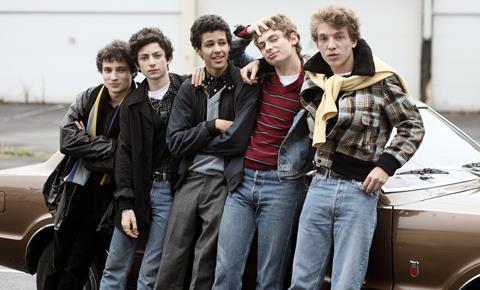 A Frencher-than-French tale of deeply-anchored yet partially thwarted romance, Arnaud Desplechin’s My Golden Days is touching, involving and very well acted.  When anthropologist Paul Dedalus (Mathieu Amalric) returns to France from Tadjikstan after years in the field, he is taken into custody at the airport. In an interrogation room, Paul tells his life story to a government official (Andre Dussolier). And what a story it turns out to be.

This is a free-standing venture, although Amalric also played a character named Paul Dedalus long involved with a character named Esther (Emmannuelle Devos, then) in 1996’s My Sex Life…or How I Got Into an Argument

Following its premiere in Cannes Directors Fortnight, this should find a big-screen home in multiple territories. Newcomer Quentin Dolmaire, who plays the teen and young adult Paul with just enough of Amalric’s mannerisms and vocal cadences, makes a stunning debut as does Lou Roy-Lecollinet as his girlfriend, Esther. Bursting with young talents but very much a look at the echoing imprint youthful adventures leave on the middle-aged (the French title, ‘Trois souvenirs de ma jeunesse,’ translates as Three Memories From My Youth), the film’s main audience may well skew older.

Divided into a prologue, three chapters and an epilogue, the story skips around in time to evoke distant locations including Soviet-era Minsk, along with Paris in the ’80s and ’90s and Desplechin’s native Roubaix, 200 km to the north of Paris but, in its own way, a slightly foreign country.

As a youngster, Paul and his younger brother and sister are terrorised by their nutty mother. Paul exiles himself to the house his Aunt Rose (glorious vet Francoise Lebrun) shares with another woman. Rose, and later a university professor from Benin (Eve Doe-Bruce, delightful), are maternal influences who help compensate for the mother Paul never loved. Paul’s father (Olivier Rabourdin) is rarely home.

As a student in Paris, Paul bounces around from youth hostels to the couches of generous strangers.  (The fact that he has no phone or fixed mailing address leads to some lovely episodes — some funny, some bittersweet — from another era.)

On a trip back to Roubaix, Paul, age 19, admits his attraction to his sister’s 16-year-old classmate, Esther, who knows exactly what effect she has on men. The bulk of the film follows the urgent need to be together and (mostly financial) necessity of being apart that characterises Paul and Esther’s romance over the years. While true to Paul in her fashion, Esther proves accommodating to other suitors.

Percolating under enigmatic Paul and racy Esther’s intense feelings is a past cloak-and-dagger episode on a high school trip to the USSR when Paul and his best friend snuck away from their tour group.

The current movie is a free-standing venture, although Amalric also played a character named Paul Dedalus long involved with a character named Esther (Emmannuelle Devos, then) in 1996’s My Sex Life…or How I Got Into an Argument and there are insights and flourishes for Desplechin followers.

Nicely wielded poetic license incorporates an “iris” effect in flashbacks as well as an omniscient narrator who weighs in without warning.

While the depiction of young love is universal, there are some exceedingly French touches, including working class girls who study Plato in the original Greek, a couple who don’t mind if their 16-year-old daughter is having sex and a father who doesn’t mind if said sex takes place in his own bed.

The film heads toward a two-pronged coda that few viewers could predict.

Producer: Why Not Productions