After meeting Death, a young German man embarks on a bizarre after-dark adventure 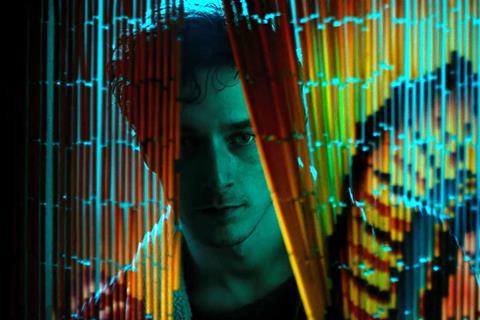 In his debut feature, young German animator Xaver Böhm invites us on a journey to the end of night – albeit a garishly lit one. A decidedly callow philosophical parable about love, death and atmospheric neon,O Beautiful Night harks back to the gloss of the 1980s cinéma du look, currently enjoying something of a retro revival thanks to knowing emulators such as France’s Yann Gonzalez. Böhm’s film is steeped in after-hours low-life chic, yet comes across as laboriously gauche, a ghost train ride that quickly wears out the passenger’s patience.

The film comes across as an earnest exercise in adolescent Dostoevsky

Beyond the odd offbeat gag and some snazzy colour effects, there’s little here to justify stretching a slender, somewhat shop-soiled idea beyond what might have made a decent calling-card short. Despite the production clout of Maren Ade’s Komplizen Film, it’s hard to see this making waves.

The film begins with nervous young protagonist Juri (Noah Saavedra) having a nightmare vision of a raven pecking at his heart. Juri, we learn, has anxiety, and possibly a fatal illness of some sort. His troubles really begin one neon-soaked night when he wanders into a shabby casino and is accosted by a gaunt, grinning, overcoated individual (Marko Mandić), who hands Juri a tarot card depicting Death.

The skinny man is the Grim Reaper himself, or so he claims, and it seems Juri is due for reaping that very night – although Death suggests he live a little first. He drags the baffled Yuri on a series of scrapes, including bumbling thefts of cars and pushbikes, and a visit to a run-down go-karting track where a sinister old woman and her deranged sidekick challenge the doomy duo to a game of Russian roulette, in the film’s most sharply-tuned sequence.

Death also takes Juri to the lair of a Korean herbalist specialising in opium poppies –the film is nothing if not artless about its exoticism – where he meets a mysterious young woman called Nina, a.k.a. ‘Poison Blossom’ (Vanessa Loibl). Nina is later seen in her job at a peep show, lolling on a turntable in her lingerie while reading Nietzsche. She’s the ultimate nerdy-boy fantasy; a passive object of fascination who’s associated with transgressive eroticism, while herself being altogether desexualised and non-threatening. She’s just waiting for Juri to come along and save her from the night, redeeming himself in the process; it comes as little surprise that by morning, love will have triumphed over death.

The film comes across as an earnest exercise in adolescent Dostoevsky, and the hothouse colour effects – moody midnight blues, blood reds, aquarium greens – generally make for an oppressive atmosphere. Even so, DoP Jieun Yi pulls out all the stops in a virtuoso display, at moments nicely capturing an other-worldly nocturnal eeriness with shades of Leos Carax’s Holy Motors. Böhm’s own score, in collaboration with Paul Eisenach, is accomplished but for the most part generic, laying on the guitar twangs and loping rhythm tracks in the classic manner of the Lynch/Tarantino pop-chic repertoire.

The acting’s engaging, though, with Loibl’s husky tones adding colour to her otherwise routine ‘dreamgirl fatale’, while Saavedra makes a likeably dorky lost soul and Mandić, resembling an underfed member of the Bad Seeds, gives his all as a sort of cool-cat Mephistopheles. The film’s real ace, however, is a series of lush colour-enhanced inserts showing floral details from Dutch Golden Age still life paintings; there’s an aesthetic originality here providing a few moments in which this airless fantasy properly breathes.