A woman returns to her childhood home in this charming animation 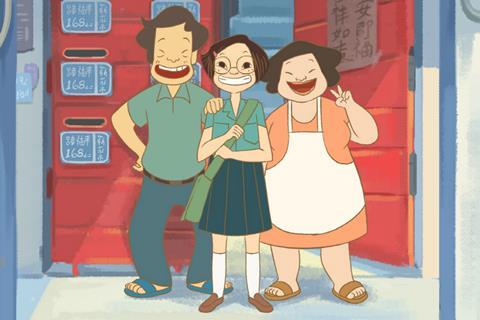 Hsin Yin Sung explores the meaning of happiness in her enchanting coming-of-age animation which spans much of Taiwanese contemporary history since the 1970s in its journey to become a full-fledged democracy.

Compelling and beautifully told through its captivating animation

While the brisk storytelling makes it difficult for viewers to fully grasp the complexities of Taiwan’s turbulent history, the universal themes it explores should make it accessible to an international audience. Premiering in Busan, Sung’s feature debut should replicate the success of her live action and animated shorts (The Red Shoes) and secure a healthy run on the festival circuit. The local political backdrop could also strike a chord with audiences in Taiwan.

The film follows Chi (voiced by Lun-Mei Gwei), who was born in Taiwan in the mid-1970s and grew up on Happiness Road. She then moved to the US to study, and later finds a job and marries an American. One day she receives a phone call to say her grandmother has died, and promptly returns back home. Back in her old neighborhood, Chi reflects on how her childhood, her life at school and her time with her beloved grandmother have all shaped her.

Frequently referenced in the story are significant moments in its history, such as the lifting of martial law in 1987 and the death of Chiang Kai-shek, the former president of the Republic of China (as Taiwan is officially known) on April 5, 1975; the very day Chi was born. And Chi was politically active in her youth, striving for a better country along with other protestors demanding democratic freedom.

At the heart of the film, however, is a search for happiness; an elusive concept that Chi repeatedly fails to grasp. She has lived the American dream, but realizes that too doesn’t guarantee contentment.

Indeed, happiness is something to which all audiences are likely to relate, regardless of nationality or background. This is what makes On Happiness Road a universal tale, even though it’s rooted in Taiwanese history. Compelling and beautifully told through its captivating animation, it also demonstrates that Sung is a talented storyteller.