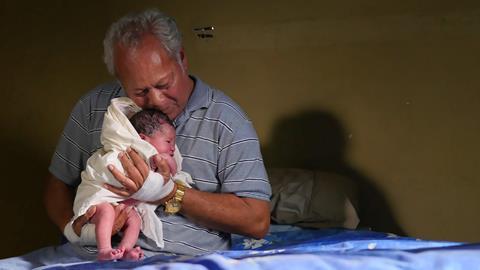 One Thousand Ropes has all the potential for a horror film as a traditional healer is haunted by the restless spirit of a long dead woman. Samoan-born writer-director Tusi Tamasese transforms that genre potential into a brooding tale of fractured families and generational conflict that builds towards a reckoning with the past, delivering enough intrigue, craft and slow-burning command of mood and atmosphere to win festival circuit favour and enhance his international reputation in the wake of New Zealand Oscar contender The Orator (2011).

One Thousand Ropes is very much a filling-in-the-gaps film as audiences are left to piece together the clues and fragments that Tamasese presents about the life of the central character Maea. Uelese Petaia plays him as a gentle, snowy-haired veteran who lives a peaceful, purposeful existence. He massages pregnant women and assists at home births. He also works in a bakery, kneading dough with the same care and diligence that he lavishes on his clients.  He seems kindly and caring but the stark walls of his home have been stripped of any family portraits and he has no contact with his daughters. One wary client confesses that “people say you are not a good man”.

There is clearly violence and heartache in his past. There is also an element of flintiness in Petaia’s performance, especially in the understated menace he conveys when confronting an unruly neighbour. Tamasese suggests that Maea is only too typical of the men of his generation who continue to fight old battles and believe that they can solve any problem with the power of their fists.

Maea’s daughter Ilisa (Frankie Adams) arrives at his home seeking shelter from her abusive boyfriend. She is pregnant and as Maea agrees to bring her child into the world there is a sense of hope in new life and restored connections.

One Thousand Ropes is very much about the tensions between traditional and modern in which Tamasese balances the social-realist drama of Ilisa’s plight with the kind of mystical elements more familiar from the work of Apichatpong Weerasethakul. The ghost of Siepua (Vaele SIma Urale) has taken up residence in Maea’s home and is visible to both him and Ilisa. She demands her lost tooth and threatens to seek rebirth as Ilisa’s child. The scenes in which the scarred, long-haired Siepua violently attacks Maea in the dark of night evoke horror titles like The Ring or The Babadook. There are more hints of the supernatural as Maea is able to remove a tooth that is lodged under the skin of his own bloody big toe.

One Thousand Ropes may be a little too enigmatic and guarded for some tastes but Tamasese does succeed in bringing all the aspects of the story together and conveying the notion that Maea is at a crossroads. New technology threatens his job at the bakery, while the community centre invites him to advise trainee midwives and become part of their world. He is also caught in the dilemma of whether to channel the violence of his past and exact retribution on the man who has beaten his daughter or find the inner strength to rise above such easy solutions.