'One Week and a Day': Cannes Review 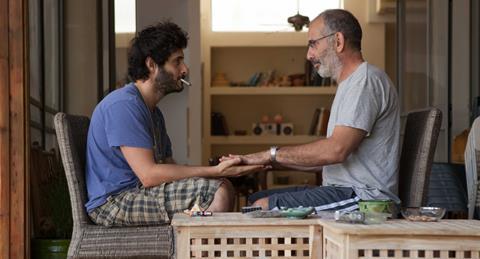 There is an abrasive, snarling humour to this impressive first feature from US-born, Israeli-raised writer-director Asaph Polonsky. It occasionally evokes something of the simmering rage that powers the comedy of television show Curb Your Enthusiasm. So when this portrait of a couple mourning the recent death of their son delivers its emotional payload in the third act, it is an unexpectedly devastating moment which more than makes up for the slight dip in momentum which came before.

This is an accomplished debut which juggles its tonal contrasts adroitly. A tragicomic stoner movie about bereavement, it is a curiosity which should pique the interest of festival audiences and could enjoy some theatrical success if backed by critical support and audience word of mouth.

The title refers to the traditional Jewish week of mourning, known as Shiva, which follows immediately after the funeral of the deceased and takes place at the home of an immediate family member. In this case, the home is that of Eyal (Shai Avivi) and Vicky Spivak (Evgenia Dodina), who are coping with the aftermath of their son’s death from cancer in starkly contrasting ways. Vicky, numbed by grief, is clinging to the quotidian routines of normal life to keep afloat. Eyal, the main focus of the film, is rather more unpredictable. Clearly suffering from temporary impulse control issues, he slaps his female neighbour, brawls with her husband and decides to blaze a trail through the large bag of medicinal marijuana that he retrieves from the hospice when looking for his son’s missing blanket.

The first of several skilfully handled moments of physical comedy comes when Eyal attempts to roll his first ever joint. After numerous failed attempts, he admits defeat and enlists the help of Zooler (Tomer Kapon), the deadbeat son of his detested next-door neighbours and a childhood friend of Eyal’s son Ronnie. But while the smoke-fuelled encounter between Eyal and Zooler, which unfolds over the course of the day after the end of the Shiva period, provides closure for both, Polonsky resists easy sentimentalisation.

The film’s least successful moments are those in which the comedy feels most forced. A sequence in which Zooler demonstrates his air guitar prowess is self-consciously wacky; an encounter with the most cheerful child ever to hang out in a terminal cancer ward is also rather laboured.

But the moments of stillness have a real potency: Eyal and Vicky lie wordlessly on their son’s bed next to Zooler, who has passed out. And later, having snapped yet again in the cemetery, Eyal stumbles onto the funeral of the woman who is to be buried next to Ronnie. The voice of the cantor, the official who sings the prayers, is mellifluous and melancholy. But it is the achingly lovely eulogy which follows, accompanied by a glimpse of the life of the man who delivers it, which floors us. The sharing of another man’s grief helps Eyal to finally make sense of his own.