'Only Men Go To The Grave': Dubai Review 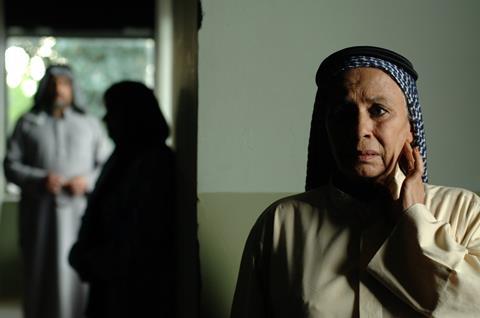 Emirati director Abdulla Al Kaabi’s peturbing Iran-set drama Only Men Go To The Grave is notable in that it tackles – crab-wise – themes of gender identity and homosexuality in Arab society while looking at an Iraqi family which has been torn apart by the Shia/Sunni divide. Starting out like an early-era Almodovar film, its openess soon becomes stilted, however, resulting in a hesitant film which tries to tie all its issues up in a twist which could be seen from afar by a blind man.

Al Kaabi has written an interesting piece, even though its execution eventually becomes airless and the budgetary limitations confining.

The first 15 minutes and its unique hook are probably enough to usher Only Men Go To The Grave into limited festival play on the LGBT circuit, although notices are unlikely to be very strong. With a dry sense of humour, Al Kaabi introduces Ghanima (Hebe Sabah), a radio host in Baghdad who receives a telephone call from her “aunty” Arfah (Salimeh Yaqoub) instructing her to come home urgently as her mother is dying and wants to divest herself of a great secret.

Ganimeh and her disliked perfume-spritzing husband Jaber (Abdolreza Nasari) race home – too fast, in Jaber’s case – but Aisha falls off her roof and dies before she can reveal all. The next three days of mourning see all the family’s tortured secrets being revealed. As the title indicates, only men are allowed to take part in the burial rituals or touch the body of the deceased in this part of the world and the women are mostly confined to the kitchen where they discuss the past, Jaber occasionally running interference.

Al Kaabi has written an interesting piece, even though its execution eventually becomes airless and the budgetary limitations confining. Flashing back to Baghdad during the Iran-Iraq war, we see aunty Arfah as a cross-dressing Arab, a counterpart to current-day Jaber and his heavily-signalled fondness for female clothing. Mum, it turns out, was a poet and possibly a lesbian, while there’s a family secret hiding in the closet (literally, as opposed to figuratively) in the present day, and another one spray painting the walls. A mad aunty arrives and a pill-popping Ganimeh becomes increasingly more surly.

Al Kaabi’s first film after two shorts which premiered at Dubai and Abu Dhabi, Only Men Go To The Grave should gain respect for its willingness to tackle taboo issues in Arab society and, even further, to try tie them into a separate story involving Iran’s Sunni/Shia rift. The director tries to overcome the single-set limitations of the piece with formal compositions, a ploy which is occasionally effective, while performances are variable and one key character is noticeably miscast, unless she’s not who she says she is – which, in a film like Only Men Go To The Grave, seems entirely possible.