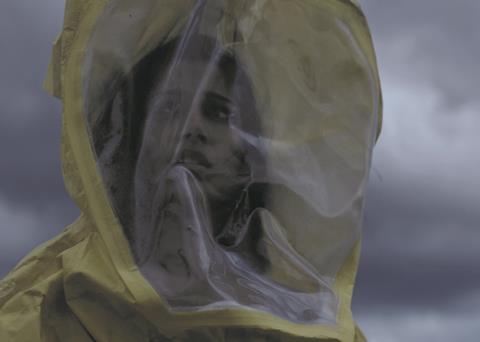 The future is predictably bleak in Only. The second feature from writer/director Takashi Doscher (Still) offers a soulful romance set in a world where a mystery virus is wiping out the female population. Tracing the fate of a single couple fuels a solid, low-key affair that might prove a better fit for a streaming service than the challenge of theatrical distribution. Stars Freida Pinto and Leslie Odom Jr should add star lustre to the film’s prospects, while they also make for a convincingly loved up couple in early scenes.

The quiet realisation of loss is more poignant than any of the larger storylines in this dour tale.

The story begins on Day 400. Will (Odom) and Ela (Pinto) have successfully remained in quarantine throughout a state of national emergency. They have a set routine that is designed to keep her safe from harm. This is the day that the police come knocking on their door and the couple decides to take flight.

Flashbacks paint the blissful normality of the couple’s past life before a comet unleashed “the deadliest virus in human history”. The story constantly folds back on itself to provide background information on the key moments leading to this point. We learn more about the sacrifices that have been required just to stay alive and the way in which Will has come to seem more like a gaoler than a protector. Covered in plastic sheeting, their hermetically sealed flat is clinical and oppressive. Cinematographer Sean Stiegemeier paints their confinement in grays and steely shades of blue, adding to the drab monotony of endless days in the one space.

As the couple takes to the road, scenes from day 44 or day 238 interrupt the action, creating a sketchy sense of story and tending to dissipate rather than build tension. Television news bulletins fill in the details of falling ash that has infected and killed millions of women, the sinister Embryo Project and the $2million bounty on any healthy female survivor who might serve to repopulate the planet. (This follows very similar lines to Casey Affleck’s Berlin-premiering Light Of My Life, which dealt with a female child nearing puberty.)

There are a number of interesting notions swirling around at the edges of the main story about what makes life worth living and what makes love endure. Doscher creates a few telling moments illustrating the sense of panic and paranoia that has infected America. The mere glimpse of a woman is like seeing a ghost and a roadside diner offers breakfast with the proviso that there are no eggs.

The plotting still tends towards the lazy and obvious as Will and Ela break cover to sample the rare delights of a meal at the diner only to make a hasty exit with the food virtually untouched and a map conveniently left on the table. You also sense that the father/son hunters glimpsed along the way are sure to make a return appearance.

There is an elegant, solid professionalism on display throughout Only but no really spark of originality or intensity that would allow it to compete in the same league as A Quiet Place, The Road or many other stories of dystopian gloom. The actors serve a sombre, reflective screenplay with suitably understated performances. Freida Pinto has more chances to shine and impresses in a final email exchange with the last surviving woman in an online support group that she has joined. The quiet realisation of loss is more poignant than any of the larger storylines in this dour tale.