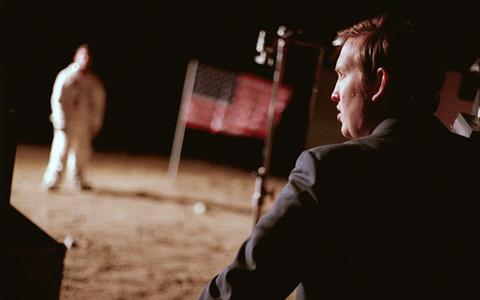 In 1967, during the height of the “Space Race,” a team of young CIA agents hatches a plan to root out a Russian spy who may be leaking information to the Soviets about NASA’s Apollo Program. Going undercover as documentary filmmakers, the agents infiltrate Houston’s NASA Space Centre to find the Russian mole. But once there, they discover a secret inside NASA that shakes up their initial operation. No longer setting out to capture the truth, they endeavour to fake it—by filming a moon landing that will fool the Soviets and the world. If this all sounds too ludicrous to be believed, it is.

Even when Johnson ups the emotional and physical stakes for his character, the bogusness of the production interferes.

Toronto writer-director-actor Matt Johnson’s movie-within-a-movie record of the young agents’ Cold War conspiracy adventures comes across more as a rambling lark than a tightly conceived film. Rather than the comic paranoid thriller it wants to be, Operation Avalanche is more of an opportunity for Johnson to show off some nifty special effects, seamlessly mixing ‘60s archival footage with the staged proceedings. Screening in Sundance’s NEXT section for lower budget movies, Johnson should be lauded for doing a lot with little means. But this Lionsgate U.S. release is mildly diverting, at best, and unlikely to travel far beyond VOD platforms.

Johnson himself plays Matt Johnson, the fledgling CIA recruit whose primary responsibility is the agency’s audio-visual needs. In between producing internal news reports showing, for example, that Stanley Kubrick isn’t a Russian spy, Johnson aims for bigger things and quickly convinces his superiors that he should take part in the NASA undercover mission.

Clearly, Johnson, the filmmaker and actor, has a passion for his project, but as the hapless and pushy character at the center of the film, he is too overblown to be relatable. It’s also difficult to root for Johnson and his team, given their lack of dimension or depth. If we’re supposed to care about Johnson’s squabbles with his longtime friend, Owen Williams, his be-spectaced up-tight partner, there is little in the script to show they have any sort of meaningful friendship or past. Johnson is supposed to be some kind of ambitious fool, embarking on endeavours that he doesn’t fully comprehend. It’s supposed to be endearing, but it’s more often just annoying.

There are some clever moments. When Johnson journeys to Shepperton Studios to see how Kubrick is credibly staging his own moon landing, he gets an autograph from the famed director and it looks real. Or when Johnson shows up in the middle of a bustling 1967 NASA control room, it produces the same wondrous effect pioneered by Forrest Gump, flawlessly merging real with fiction. Another funny bit involves the team’s first test shoot of an astronaut stepping along the surface of the moon—but rather than zero gravity walking, he’s more “prancing” along in the desert. But these sequences aren’t enough to sustain the entire enterprise.

If the humor doesn’t always hit, the film’s darker conspiratorial turns never feel genuinely suspenseful, either. Even when Johnson ups the emotional and physical stakes for his character, the bogusness of the production interferes.

Most problematic is that Johnson’s personal cameraman—who films everything we see on handheld cameras—would be recording so much of what’s going on, from internal squabbling to discussing conspiratorial suspicions to being chased in a car by enemy agents. Undoubtedly, the car chase is the most entertaining sequence in the movie; as gunshots penetrate their windows, Johnson and his cameraman flee at top speed in reverse, fearing for their lives. But wouldn’t the cameraman duck for cover instead of sitting up to capture the excitement?

Johnson made a name for himself a couple of years ago with a similarly structured docu-fiction contraption called The Dirties, featuring many of the same cast and crew as Operation Avalanche. While that film had its fans, fully embracing Johnson’s shtick as a bumbling every-guy and his playful mixing of fact and fiction, slapstick and seriousness, the new film isn’t likely to increase his followers.