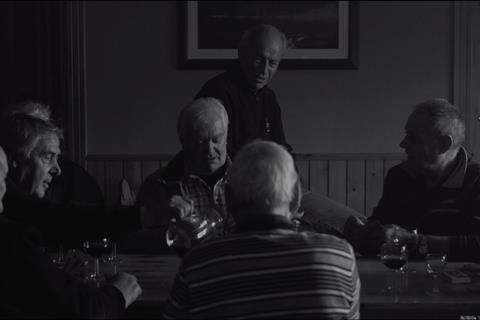 The oddest of odd couple relationships drives this deliciously murky comedy about two men flung together by unusual appetites and unpalatable urges. Middle-aged factory worker Fausto (Walter Giroldini), with his gangly limbs, stringy bleached hair and too-tight trousers, is brow-beaten by his mother and sister. Ivan (Diego Pagotto), a small, neat man with the expression of a long-suffering shrew, is a PhD philosophy student. On paper, they have next to nothing in common. But these two strangers met and made a deal in one of the grubbier corners of the internet – and now comes the moment of reckoning. The very enjoyable feature debut from Francesco Sossai defies expectations at every turn. It’s a film which threatens to explore the unspeakable and finds, instead, something oddly life-affirming.

A rough and ready low budget production, the film makes the most of its assets

An Italian-language picture and a German production, Other Cannibals unfolds deep in the mountain country of the Italian Dolomites. It’s a region with a distinct personality, one which adds considerably to the somewhat eccentric, lawless and booze-addled tone of the picture. A rough and ready low budget production, the film makes the most of its assets: a teasing screenplay which hints at the truth behind the meeting of Ivan and Fausto, and a terrific cast which seems fully rooted in the world which is depicted. Distinctive enough to enjoy a healthy run on the festival circuit, the film could subsequently find an audience through a curated VOD platform.

The film dances around the flesh and bones of the deal which has been struck between the pair and, in order to maintain a degree of the tantalising mystery which shrouds the first half of the picture, this review will not reveal this plot detail. Suffice to say, there’s a moment of dysfunctional domesticity in a scene which sees Ivan and Fausto knife shopping together which sums up the film’s curious tonal blend of the extreme and the banal.

What’s clear is that neither man expected to make a friend. But over a shared dish of stockfish that Fausto’s mother harries him into preparing, and after an evening spent tripping on acid, there’s a sense that two very lost souls have, in some small way, connected.

Haphazard handheld black and white photography at the film’s opening gives a sense of the disquiet in the heart of Fausto, whose grinding daily routine in the local factory fails to suppress the unhealthy thoughts which play on his mind. The camerawork becomes progressively less jittery once Ivan arrives and a tentative friendship is forged. Towards the end, in a bar and accompanied by a spontaneous outbreak of close harmony singing from a table of shitfaced old men in jaunty Tyrolean hats, the framing is a potent device. Both men are present in each shot and reverse shot, one facing the lens, one closely foregrounded and out of focus at the edge of the frame. It’s as if the boundaries between the pair have started to blur. Just not in the way that they had originally planned.