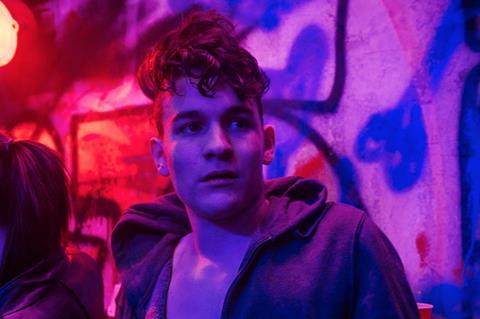 Loss is all-consuming in Otto The Barbarian. Romanian writer/director Ruxandra Ghitescu’s debut feature immerses us in the life of a teenage outsider coming to terms with the suicide of his girlfriend. The subject matter is sensitively handled but an (understandably) morose central character and lugubrious pacing makes for a demanding film that might struggle to find a commercial foothold following its world premiere at Sarajevo.

17 year-old Octavian (Marc Titieni) prefers the moniker Otto The Barbarian - a fantasy figure warrior who always rescues the princess. In the real world, Otto was unable to save his girlfriend Laura (Ioana Bugarin) who has taken her own life. Her death leaves him isolated and unable to articulate his feelings. Is he glad that she found peace or guilty that he was unable to prevent her actions? Others don’t know what to make of Otto as they try to figure out what happened and why.

Teasing his hair into a mohican, Otto is the only punk in the city. Swaggering around in a black leather jacket with the logo of American punk rock band The Misfits on his back, he is not like anyone else in the neighbourhood. Poker-faced and uncooperative, he gives little away. “You’re not much of a talker,“ observes social worker Costin (Iulian Postelnicu) drily.

We do know that Otto has feelings. We can see it in his blazing eyes and the seesawing responses to those who reach out to him. He is an intriguingly contradictory character. Constantly at odds with his father Nicu (played by Marc Titieni’s real life father and Graduation star Adrian Titieni) and hostile to school friends, he also shows consideration for his mother, makes daily visits to comfort Laura’s grieving mother Mirela (Ioana Flora) and shows nothing but tenderness towards his frail, elderly grandfather Bubu (Constantin Draganescu).

Often prowling city streets in the black of night, Otto finds solace in old footage of Laura that seems to flood this gloomy film with blinding light. Cinematographer Ana Draghici makes the most of the contrast in mood and lighting. Julia always seems to have been bathed in sunshine on a summer day. There is a playful side to her character but an alarming one that cheerfully flirts with death. There is a suggestion that she was bipolar. She is shown to have a fondness for performing tricks that involve some element of self-harm - holding her breath submerged in a bath tub of water or using a burning flame on her palm to test whether there is any spark with Otto. We gradually begin to understand Otto’s ambivalent feelings about her death.

Marc Titieni’s soulful central performance keeps us engaged by Otto and aware of all the emotions simmering beneath the surface of his implacable features. The growing trust in Costin and Otto’s drunken abandon at a gig finally allows the character to let off steam and reveal some of his wounded vulnerability.

There are moments like these that count in Otto The Barbarian but it is a moody, slow-burn of a film with a good deal of moping and cigarette smoke-wreathed introspection along the way.