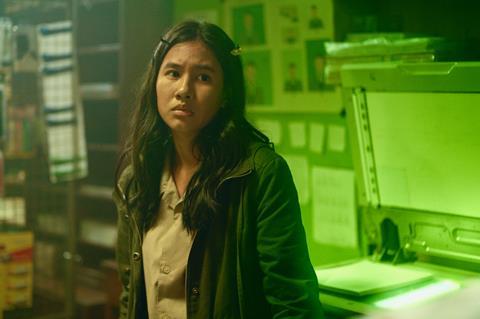 Sur (Shenina Syawalita Cinnamon), a first-year computing student, finds a welcoming family in the campus theatre company. But following a party to celebrate a prize-winning production, Sur wakes the next morning blurry from something more than drink, with a blank space in her memories of the evening and the suspicion that one of her friends might have behaved inappropriately. Using her computing skills, Sur sets out to uncover the truth about the night. This compelling tech-thriller unpicks the inequalities of Indonesia’s conservative society, both economically and sexually, to deliver a powerful commentary on the considerable cost of pursuing the truth.

This is the first feature from Jakarta-born Wregas Bhanuteja, following a series of well-received shorts. Lembusura (2015) screened in Berlin; Prenjak/In The Year Of Monkey (2016) won the prize for Cannes Critics’ Week Best Short Film, along with awards at the Melbourne and the Singapore international film festivals. His most recent short, No One Is Crazy In This Town (2019), screened in Sundance, Busan and Locarno. Photocopier is a youthful and dynamic debut which, while it may connect best with audiences in the domestic market, should find further interest on the festival circuit, and certainly establishes Bhanuteja as a filmmaker to watch.

Shy Sur is on the periphery of the Mata Hari theatre company, but her input — she designed the company’s slick new website — is valued, attracting the notice of the wealthy father of Mata Hari’s playwright, the softly-spoken Rama (Giulio Parengkuan). It is at Rama’s gentle suggestion that Sur attends the party, which is hosted by his parents. As a Muslim, Sur doesn’t drink — her attendence at the party is only permitted by her father on the condition that she steers clear of alcohol. But peer group pressure is a powerful thing, and in her desire to please her sophisticated new friends, Sur takes a glass of wine and then a shot.

The rest of the evening is a blur. But the woozy selfies which were uploaded to her social media during the night are noticed by the panel reviewing her scholarship — immoral acts, she is told, render her exempt from the financial assistance she desperately needs in order to study at the university. Her father’s zero-tolerance approach to family disgrace prompts him to chuck his daughter out onto the street. So Sur holes up with her childhood best friend, Amin (Chicco Kurniawan), who runs the copy shop frequented by the university students, and sets about hacking the phones of the customers in order to piece together the missing chunks of the night.

Nervy camera and buffeting sound design — there frequently seem to be several competing radios playing, layered against the hustle of the Jakarta streets — add to the building tension, as does the government’s response to a dengue fever outbreak, which periodically fills the neighbourhood with toxic fumes.

Not everything works — the running time could be tighter, and a confrontation between Sur and the individual she accuses of misbehaviour is bizarrely theatrical. But terrific emotionally exposed performances from Cinnamon as Sur and Lutesha, in a key supporting role which grows in significance as the story unfolds, are an asset, as is the potent climactic scene, which makes creative use of the film’s namesake.