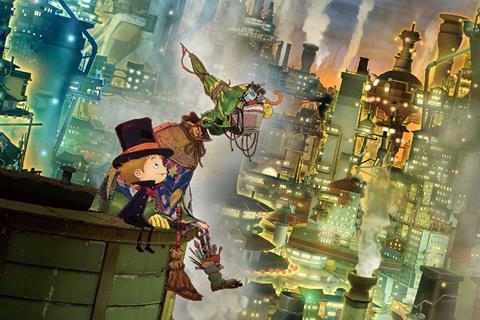 A starry-eyed, soft-centred eco-fable for kids under the age of cynicism, Japanese Studio 4°C’s first full 3D animated feature tells the story of a boy chimney sweep who befriends a man made entirely of garbage, in a town cloaked in eternal penumbra due to the fumes belched out by its forests of tall smokestacks. It’s a gentle enough tale of an underdog with a dream which becomes a mission, one that courts the sympathy of its primary-school target audience by making its central character, Lubicchi, both brave and fearful, independent and in need of parental guidance.

Based on a bestselling illustrated children’s book by Japanese comedian turned storybook writer Nishino Akihiro, who also wrote the script, Poupelle the film has a great deal of heart but not much in narrative or visuals departments to attract Pixar- and Disney-fed kids outside of Japan with no investment in the source material. It’s the kind of old-school animated film where everything and everyone stands still – literally – when a character makes a rousing, sentimental speech, a film whose songs are full of on-the-nose lines, such as “He came on Hallowe’en night, a man of garbage – the Garbage Man”.

Released by Toho in Japan on 26 December, Poupelle has since taken over $20 million – not a bad total in a pandemic year. Its prospects abroad, however, are as murky as the sky above Chimney Town. Though its first viewing outside of Japan and South Korea will be as the closing film at the Rotterdam festival in June, this is not the kind of sophisticated, edgy anime likely to cross over into adult fan circles; unlike Studio 4°C’s 2006 breakout movie, the eye-catching dystopian punk fable Tekkonkinkreet. Meanwhile, children who don’t speak Japanese will need to be courted by pro voicecast dubbing rather than subtitles – a deterrent for potential distributors.

The film is set in a grimy metropolis where chimneys pour out sooty smoke, entirely obscuring the sky – or rather, becoming the sky for inhabitants who have never known anything else. Only Lubicchi, a put-upon, friendless yet cheery tyke of a chimney sweep with a mop of auburn hair and two projecting front teeth, is convinced that there is something called blue sky and objects called stars up there. He knows this thanks to his dad Bruno, a giant of a man who went missing a year previously but features in several flashbacks. The people of Chimney Town are kept in line by sinister Inquisitors, visual mash-ups of Klan members and high priests from the Egypt of the pharaohs, whose job it is to stamp out Heretics like Bruno, Lubicchi, and the gangly garbage man who suddenly appears one Hallowe’en night, his body an assemblage of junk, like a scrap-heap spin on an Archimboldo portrait.

The friendship that develops between Lubicchi and the garbage man he christens Poupelle is at the core of a schmaltzy tale with a worthy message about how, so often, ‘monsters’ are simply societal constructs, herd-based rejections of difference or disadvantage. With an obligatory falling-out phase around three-quarters of the way in, the conventional Lubicchi-Poupelle bond at least serves to anchor a story that otherwise feels as disjointed as the garbage man with his umbrella-handle nose.

Poupelle Of Chimney Town has the taste for digression of a Miyazaki story like Princess Mononoke, but lacks the latter’s dramatic backbone. The lowpoint comes in a long flashback during which Chimney Town’s origins are linked to a bizarre theory about the power for good of bio-degradable cash (have these people not heard of credit?). While a fast-talking rebel mole that lives underground gets enough screen time to engage younger viewers, other characters are little more than walk-ons – like Dorothy, a cute friend of Lubicchi’s wheelchair-bound mother, whose rare appearances seem inserted purely so that she can be seen firing a big bazooka in the final battle.

But perhaps this is to make too much of a story with a running gag about how Poupelle is – well, smelly. Fans of classic Japanese anime are likely to be more distracted by the fact that Studio 4°C’s first full foray into 3D animation feels like an unfinished learning curve. The steampunk-influenced Chimney Town backgrounds are evocative, but there’s a lack of clarity in the often cluttered meld between character and background that is at its most queasily garish in a Hallowe’en Dance sequence. Old-school anime aficionados will look in vain for the clarity achieved in hybrid 2-D/3-D features like Studio 4°C’s last, Children of the Sea. This muddiness extends to the soundtrack – a mélange of orchestral tracks and cutesy songs that feel like they’re on a random shuffle setting.

Screenplay: Akihiro Nishino, from his book of the same name