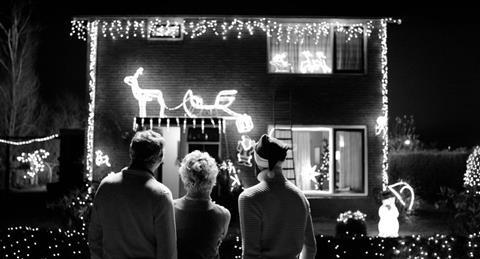 The vicissitudes of family life, as experienced by confused males, are observed from five entirely different, distinctly skewed angles in Quality Time. This is the bracingly perverse debut feature from Daan Bakker, previously known for his shorts and as a writer on family film A Christmoose Story. Stylistic cool, touches of black humour and bracing disregard for the obvious should make this portmanteau - subtitled ‘A Film in Five Parts’ - that rare thing; a Dutch comedy that travels, at least to festivals and niche slots with a taste for fresh, irreverent invention.

Each of the film’s chapters - related only thematically - profiles a different beleaguered male. The first, and by far the oddest, section, confrontationally placed up front, concerns a young man named Koen - or rather, a large white dot on a red background, which throbs as it speaks in a garbled robotic voice. The dot, let’s say, represents Koen, who’s dreading an imminent family gathering; each time he attends one, he finds himself the butt of the same old joke, guzzling ham and milk for general amusement.

As Koen ‘speaks’, two smaller dots enter the frame, and we quickly twig that these are his parents. By the time the background switches to blue, we recognise a field of coloured dots as Koen’s relatives. Somehow, our habit of reading images anthropomorphically has turned these abstract forms, with their electronic burbles, into ‘characters’ - and even comically poignant ones.

The second section, ‘Stefaan’, involves a youngish man (Noël Keulen), who has moved back in with his parents and taken up photography, presumably as occupational therapy after a mental crisis. A series of sub-sections show him taking various pictures, all related to incidents in his life; each episode shows the scene from a distance, strikingly framed in locked shot - sometimes directly from above - with subtitles (in English in the version reviewed) spelling out the inaudible dialogue and allowing us to piece together clues to Stefaan’s disturbance.

Section three, ‘Kjell’ - with dialogue in Norwegian - is a fanciful tale of the unexpected in which a social misfit (Thomas Aske Berg) revisits his childhood - thanks to the most cheerfully matter-of-fact time travel premise in comedy sci-fi - to avert the episode that he thinks caused his introversion. Attempting to further reverse-engineer his self-esteem, Kjell then stages a bizarre mediaeval fantasia. And weirder still is ‘Karel’, in which a series of black and white vignettes spell out a macabre tale of alien abduction.

However, final episode ‘Jef’ is rather anticlimactically straightforward, although its gentler tenor gives the film a dash of more mainstream appeal. Visiting his new girlfriend’s family in the country, an aspiring musician (Steve Aernouts) finds himself alternately trying too hard to please and messing up embarrassingly, notably in a textbook nocturnal pee episode. The only section shot in a familiar realist style, Jef’s story derives charm from relaxed ensemble acting, and gets a further fillip from ironic closing comments in the form of onscreen captions.

Inventively shot and edited, Bakker’s commentary on human folly and insecurity has a dark streak of insight that might put viewers in mind of Ulrich Seidl or Ruben Östlund’s Involuntary. Quality Time certainly introduces Bakker as an individual talent with a bent for bold, somewhat conceptual stylistic play, and a coolly detached comic sensibility that’s all the more biting for its cool detachment.