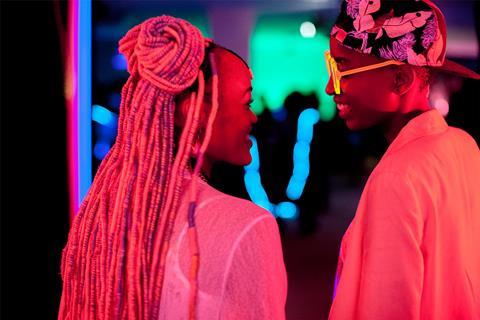 Hailed as a breakthrough for African cinema and subsequently banned in its home country of Kenya, Rafiki generated a considerable weight of expectations ahead of its Cannes world premiere. The reality is a dynamic, smoothly-executed tale of impossible love that brings fresh energy to a subject that may seem overly familiar to western eyes. Slight but very likeable, it should become a festival fixture and find a ready audience among LGBTQ viewers and those supportive of rising stars in world cinema.

Reminiscent of the early work of Spike Lee

Wanuri Kahiu’s second feature reveals a lightness of touch in her approach to an adaptation of the prize-winning short story ’Jambula Tree’ by Monica Arac de Nyeko. Sharp editing and fluid camerawork help create a portrait of a Nairobi housing estate pulsing with life. As someone casually strums a guitar, others exchange gossip, play football, chop vegetables for a street market or string washing between houses. All human activity unfolds in plain view.

When teenager Kena (Samantha Mugatsia) breezes through the area on her skateboard, the film’s fizz and sense of community are reminiscent of the early work of Spike Lee. Once the story unfolds, it also reveals echoes of Hettie Macdonald’s Beautiful Thing (1996).

Considered one of the boys by Blacksta (Neville Misati) and his mates, the lean, willowy Kena is not like other girls. She plays on Blacksta’s football team and quietly scoffs at the idea that her big dreams are of a good husband, a solid marriage and a family. Lingering glances exchanged with Ziki (Sheila Munyiva) are the start of a dangerous friendship. Ziki is a riot of colour from the bubblegum pink of her nail vanish to the rainbow hues of her hair. The smouldering attraction between the two girls gradually ignites despite the prejudice and ignorance that surrounds them.

Rafiki tries to pack a lot into its modest running time as it addresses a range of social attitudes, political issues and family matters that threaten the happiness of these star-crossed lovers. The insulting language of casual homophobia is never challenged, the church preaches against same sex relationship and the girls are daughters of rival, image-conscious candidates in a local election. Kena’s father John (Jimmy Gathu) is one of the few adult figures sympathetic to the couple.

Rafiki also strives to weave in empowering notions as the girls discuss their hopes and dreams for a future in which they might travel the world and not settle for being a nurse, when they have the academic qualifications to be a doctor or a surgeon.

The central couple are very engaging and their relationship will win the hearts of inveterate romantics. Kahiu brings a soulful quality to the scenes between the girls as they go clubbing or find their own private romantic haven in an abandoned cvan decked out in candles and flowers.

Charismatic performances by Samantha Mugatsia and Sheila Munyiva make you believe in the characters and invest in the romance. When harsh reality inevitably intrudes on their dream love, the emotional impact is all the deeper.