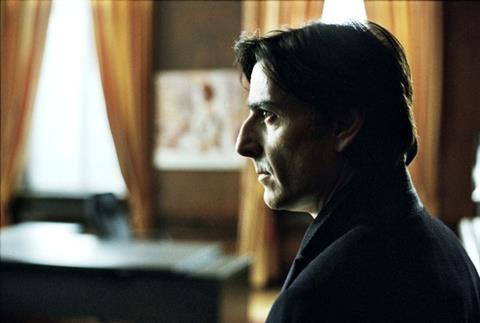 Smarter-than-average criminals snatch a French captain of industry and hold him for ransom in Rapt, a nail-biting contemporary thriller that investigates the value of one human life when tens of millions of euros and national prestige are at stake. Blending emotional suspense with gripping action sequences, writer-director Lucas Belvaux is in equal or better form than he displayed in his acclaimed Trilogy.  Returns in French-speaking territories look good and distributors attuned to classy drama with gritty elements should take a look.

Attal lost 20 kilos in the course of the role, but his appearance never plays like a stunt.

French audiences will recognise Rapt’s story as closely inspired by an authentic 1978 kidnapping case, but international viewers need nothing more than an awareness that, as F. Scott Fitzgerald put it, the rich are different. What’s on screen is visceral and credible thanks to a well-chosen cast anchored by Yvan Attal’s gut-churning performance as the victim.

In the film’s sweepingly orchestrated first five minutes  we learn — or believe we learn — what sort of guy Stanislas Graff (Attal) is. Graff has an impressive office in a very imposing building (he’s about to accompany France’s president on a state visit to China); he pays a carnal visit to a young mistress in a gorgeous Paris penthouse; loses a frightening amount at poker without blinking; and greets his elegant wife (Consigny) and teenage daughters in his lavish home.

Then, wham! A commando abducts Graff from his chauffeur-driven limo and spirits him away in broad daylight. His fall from stratospheric power to utter helplessness is so abrupt and so complete that the viewer can’t help but identify with Graff’s plight.

What distinguishes the film is its eye and ear for how top-tier power brokers and people used to maintaining appearances at all costs cope with a dilemma on this scale.

The kidnappers are cold-blooded — they sever one of Graff’s fingers —but so is the board of directors of the 130,000-employee firm Graff runs. The ransom is 50 million euros, a sum the company sees as Graff’s problem, ruling that every penny should be paid from his personal wealth. The formal precision of verbal exchanges is bone-chillingly pragmatic.   It would appear that the health of the industrial group comes before the health of its CEO.

The reaction when Graff’s wife and mother (a superbly haughty Francoise Fabian) learn he’s “only” got a portion of the fee required is, well, priceless.

Police detectives assigned to the case have their own brand of finesse and come across as more compassionate. But what happens if the ransom demand isn’t met in full?

As Graff struggles to survive while hoping he’ll get out alive, the French press has a field day revealing the aspects of his life he’d managed to keep under wraps.

Cut off from any news of the outside world, Graff endures a physical and mental nightmare as his captivity drags on. Attal conveys the inherent dignity of a man with prodigious appetites who is well-born but believes in hard work.  The actor lost 20 kilos in the course of the role but his appearance never plays like a stunt.

Consigny is also excellent as the spouse who must juggle public humiliation with the prospect of widowhood.

Widescreen compositions and sharp editing put us where the action is, whether it’s the private ordeal of one character or a manhunt conducted on land and from the air.