‘Redemption Of A Rogue’: Galway Review 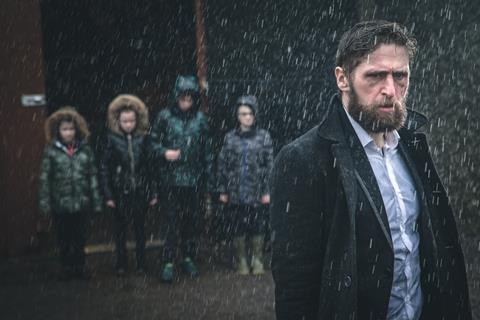 ‘Redemption Of A Rogue’

A prodigal son’s return has rarely felt as unwelcome as it does in Redemption Of A Rogue. The feature debut of award-winning playwright Philip Doherty squeezes pitch black comedy and soulful reflections from the soggy purgatory of its irresistible Groundhog Day-style premise. A world premiere at Galway should see it on its way to a bright commercial future.

Doherty may be leading us along a familiar path but it is one marked by inventive humour, engaging characters and some unexpected detours

Doherty’s cheerfully dark and quirky tale wears its influences lightly. There are nods in the direction of everything from the blacker corners of Ealing comedy to the deadpan delights of Aki Kaurismaki via the Coen brothers, John Michael McDonagh and even a hint of Fellini’s exuberance. Doherty combines all the colours of that palette into something distinctive and broadly appealing.

Aaron Monaghan cuts a wonderfully forlorn and bedraggled figure as Jimmy Cullen, the kind of individual who gives pariahs a bad name. His return to the fictional town of Ballylough (set in Doherty’s native County Cavan) is met with shock and disbelief. How dare he to show his face? His brother Damien (Kieran Roche) greets him with a vicious head butt. His dying father (Hugh O’Brien) uses the last breath in his body to try and strangle him before passing away. Now all that remains is to bury him and mourn. But there’s a catch. The Will stipulates that he cannot be laid to rest on a day when it rains. As Ballylough is a town where the heavens are permanently open, Jimmy is stuck in his own personal hell.

As each successive morning dawns grey and sodden, Jimmy is confronted by the wreckage of his past and the possibilities of a brighter future, especially when he meets seductive singer Masha (Aisling O’Mara).

Doherty may be leading us along a familiar path but it is one marked by inventive humour, engaging characters and some unexpected detours. He may display too much of a fondness for whimsical fantasy sequences, but revealing flashbacks are deftly handled and the parade of eccentric individuals and local colour always raises a smile. Cinematographer Burschi Wojnar captures the gloomy beauty of County Cavan and makes the location feel essential to the story.

Doherty confidently handles the changes in tone that mark a journey from darkness to light and give the film a more serious intent. He embraces the religious elements of the piece and allows the despairing, suicidal Jimmy to emerge as a Christ-like figure.

Doherty impresses as a storyteller and for his skill with both visual and verbal humour. His love of language and its precise usage is a constant joy from the banter between Jimmy and his sarcastic brother, to an encounter with a dour hardware store owner and a memorable speech in which Jimmy systematically deconstructs the ten plagues of Egypt in the book of Exodus.

The film had an earlier title of Redemption Of A Rogue: A Blues Opera and Doherty makes effective use of a bluesy, emotional score by Robbie Perry. The music that soars on the soundtrack is often revealed as being played on screen by musicians standing in a rainswept alley, performing in a shop front window or lurking just out of shot.

Unfolding in chapter headings from ‘The Condemned’ to ‘The Redemption’, Doherty’s assured debut has enough laughter, warmth and eccentricity to win hearts in Ireland (where Wildcard will distribute) and far beyond.