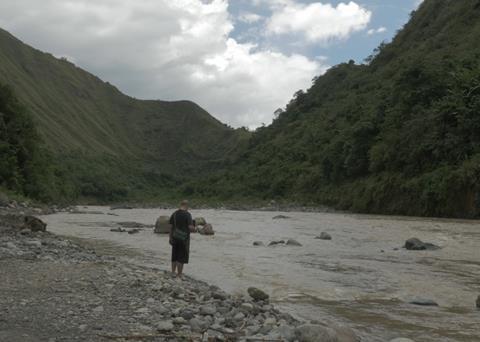 ‘Remnants of A Revolution’

Frail and ailing, Pepe Luneta is nearing the end of his life. When his son Bam is unable to secure travel documents to travel from the Philippines to Germany to visit him, Bam’s partner, the filmmaker Cha Escala, makes the journey in his place, with the intention of shooting footage of Pepe to take back to Manila. But what starts out as an inoffensive, if slightly rambling personal family document, a testimonial from an absent father to the son he hasn’t seen since he sought political asylum in Germany twenty years before, gradually evolves into something darker and more troubling. And Bam must re-evaluate his long-cherished image of his father as a hero of the fight against the repressive Marcos regime and acknowledge that for many, ‘Ka Pepe’ is a villain in the story of the country’s turbulent past.

An examination of the way that fervour and idealism can tip over into oppression, and of how the right and the wrong side of history are closer together than you might think

This glimpse of the hidden skeletons in a family history is both intriguing and ultimately a little unsatisfying. Escala combines reminiscences from Pepe and his comrades from the Communist party and the New People’s Army (the armed wing of the Communist party) with archive material and – less successfully – dramatic reconstructions, to excavate the secrets from Pepe’s past. But Pepe just hints at shame for an unspecified regret, and Cha and Bom only later discover the truth, by which time the old man is too close to death and too far away to provide the film with the confrontation and closure that it ideally needed. Still, it’s a thought-provoking examination of the way that fervour and idealism can tip over into oppression, and of how the right and the wrong side of history are closer together than you might think. Remnants of a Revolution will mainly be of interest to a Filipino audience, but could see further festival bookings.

Pepe Luneta wheels his walking frame around the gardens of his sheltered accommodation in Bielefeld, Germany, pausing to pick a flower. His movements are laborious, his attention wanders a little now and then. But once he starts to recall his years as a freedom fighter and political prisoner, there’s a sharp acuity and sense of purpose. He stresses, on several occasions the need to be ‘self-critical’. Pepe, it becomes clear, has something to confess.

Pepe is candid about some aspects of his life – his homosexual tendencies, he observes, put him at odds with some of his fellow New People’s Army members. “Just because someone is progressive, it doesn’t mean that they are not flawed.” He’s talking about the machismo which was rife within the movement and which caused him to hide his sexuality, but, once we learn more about his past, he could equally be talking about himself. While Pepe concedes that he is “aware of mistakes” in his actions, he stops short of confessing outright. The lack of transparency in the central character is, in some ways, matched by that of the filmmaking. Escala echoes the scrappy immediacy of the archive material with that of the dramatic reconstructions, so it’s not always apparent which is real and which is imagined. This blurring of the lines sits a little uncomfortably with the themes of a film which deals with the disclosure of that which has long been hidden.

And Pepe’s secret? Bom stumbles upon it by chance, when a friend reveals that an acquaintance was tortured by Pepe during the paranoid purges in the Communist party in the late 1980s. A little digging reveals a sorry catalogue of violence and abuse, recounted impassively by one of Pepe’s alleged victims and a woman who worked alongside him. The details are chilling and there is no reason not to believe them. But the film’s failure to hold the old man to account, while understandable, slightly undermines the impact of the accusations.