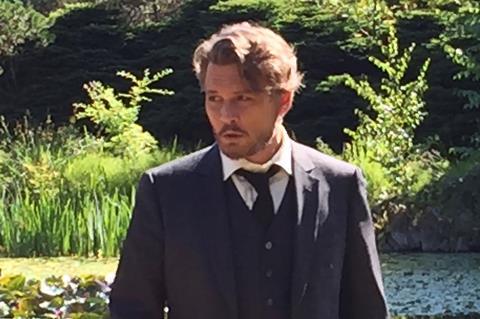 The idea of a lofty academic caught in a real-life crisis has proved fertile ground for novelists and film-makers the world over - it’s a sub-genre with its own set of tropes which director Wayne Roberts turfs over furiously in Richard Says Goodbye, with Johnny Depp as the beleaguered English prof who is given a pre-credits diagnosis of terminal cancer.

Sometimes a bad film is just a bad film, but Depp is most likely to pay the price

Caught in the Global Road fallout, the much-ballyhooed Richard makes its world premiere at the Zurich Film Festival without any news of who will assume sales responsibilites. Any company which takes it on – or distributor who has pre-bought - will have to peddle Depp’s appearance and performance over the film’s under-developed content and dubious sexual politics, hoping to sell it as a comeback of sorts. Richard starts off with an appealingly off-beat slant and an amusing performance from Depp which is far fresher than any we have seen from him in recent years; but as booze-hound Richard starts to say farewell, adios, auf wiedersehen, and goodbye, it all gets predictably sloppy - to the point where you long for someone to put this film in a taxi and send it off into the night.

Told in six dingy chapters, Richard Says Goodbye sees Depp play Richard Brown, English professor at an unidentified upscale college full of wood-panelled walls and even, in one alarming scene, red tartan wallpaper. (Both the main building and the faculty housing look very much like an old-fashioned golf club.) On receiving his diagnosis, Richard launches into battles on two fronts – the first at home, with his adulterous wife (Rosemarie DeWitt) and lesbian daughter Olivia (Odessa Young); the second at school, where he goes all Dead Poets Society on his class while trying to blackmail the Dean into giving him a paid sabbatical. Richard has decided not to go in for treatment, which may prolong his life by six months, but to live his last year to the fullest.

This involves a lot of red wine and martinis and an attitude to sexual politics that puts Donald Trump to shame. As Richard sways around his dinner table, classrooms, and across the local pub, it’s hard not to recall Captain Jack Sparrow, a role which haunts Depp in a way all those residuals may not even be able to compensate for.

It all seems like a good idea to begin with: DeWitt’s role is reminiscent of Kathleen Turner in The War Of The Roses; Depp is initially engaging; the always-reliable Danny Huston plays Richard’s best friend, Peter. It seems almost depressingly inevitable, however, that Richard’s wife would be sleeping with his boss; that he would sexually experiment with a student (the film thinks it’s being clever, undoubtedly, by that student being black, and male); and he picks on one of his female students who is obsessed with feminist literature in a way that is meant to be funny, but is actually mean-spirited and poorly-executed.

Richard is glaringly under-written. While films (and books) of this genre tend to drench the viewer in academic references, Richard Says Goodbye fields Moby Dick, and that’s it - Richard forces his feminist student to read it, and, in doing so, she realises there’s more to literature. In the same way, one supposes, that a film-maker might watch Citizen Kane and realise he should do a better job than this. The film also loses interest in Richard’s wife, one of the film’s more interesting characters, in order for the prof to start making noble-minded adieus. Life is like a bird song, he tells his students, and the music cues everyone to well up.

Richard Says Goodbye is not attractively shot; interiors are cramped and oddly lit, and there are scant exteriors. This is not a film with a lavish budget, but Richard’s credits do reveal that Mr Depp had hair, make up, clothing and “sound” assistants, so there was money, but it was not well spent. During a florid time in Depp’s personal life, this film is an easy target for being misintepreted by those with an axe to grind in the “me too” era; a sadder truth is that its clumsy approach was most likely unintentional. Sometimes a bad film is just a bad film, but Depp is most likely to pay the price.