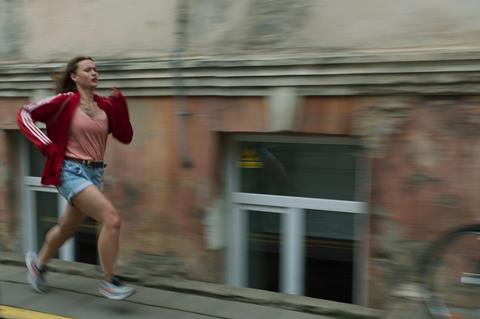 Jakstaite’s breakthrough performance is certainly the stuff of awards

Premiering in the East of the West competition at Karlovy Vary, this taut and well-mounted psychological drama is, for all its merits, only a viable theatrical proposition in the Baltic (and perhaps nearby Poland). Elsewhere, festivals are the logical showcase for an uncompromisingly prickly picture whose nerve-quickening soundtrack deserves the full benefit of theatrical audio technology.

Jakstaite’s breakthrough performance as Marija is certainly the stuff of awards, harking back to the spectacular emergence of Jennifer Lawrence — whom the appealing performer, who also has a touch of Kate Winslet about her, passingly resembles — in Debra Granik’s Winter’s Bone. The action here is decidedly urban rather than rural, however, but once again the harassed protagonist is in dogged pursuit of a beloved male. In this instance, the “quarry” is Marija’s volatile paramour Vytas (Marius Repsys), a highly intelligent PhD candidate who has fled their shared apartment following an apparent psychotic episode (seemingly involving a physical assault upon his partner), and whom she tirelessly seeks with the assistance of various friends, relatives and strangers.

That this Vytas is the same Vytas who was the main character in The Saint is indicated by the presence of Indre Patkauskaite, again playing Jurate (his wife in the first film, his ex here), but otherwise there are no strong thematic or narrative connections between the two pictures; Runner can be appreciated by those with no knowledge of its predecessor. At first what seems like a Central/Eastern retread of Run Lola Run — Marija’s Nike running shoes, with their coral-pink swoosh, certainly do more than their share of pavement-pounding — gradually shades into intriguing, ambitious and ambiguous narrative terrain.

Twenty-four hectic hours in a person’s life are captured by cinematographer Narvydas Naujalis via widescreen handheld images, then trimmed to a nippy 87 minutes by editor Ieva Veiveryte. Having initially only seen and heard about Vytas and his “condition” from Marija’s perspective, we slowly grasp that there may be more than one character here suffering from mental illness. “Try To Focus On Happy” reads the lettering on one of her numerous tattoos, but the location of the last word within a tight mesh of concentric lines makes the body-art more ominous than uplifting.

Is Marija really seeing increasing numbers of soldiers around the city? Could a friendly stray Rottweiler perhaps be a figment of her overheated imagination? The crushing strain on the nerves of this hard-working 27-year-old — it’s specified she was born in 1990, the year of Lithuania’s independence from the USSR — finds its viscerally disturbing analogue in the subtly-modulated sound design by Martin Ozvold, Lukas Moudry and Krystof Blabla.

Their work is unfussily and organically integrated with Jakub Rataj’s sparingly-deployed, minimalist but piercing score (an auspicious first solo feature credit). The aural landscape crafted by this quartet and the director foregrounds jarring irruptions, most spectacularly when a fast-jogging military troop swarms past and around Marija as she walks on a quiet pavement, amid a sudden cacophony of thudding boots.

Time and again the blaring ringtone of Marija’s ever-present smartphone is amped up for maximum annoyance; not since the Safdie brothers’ Uncut Gems has a film’s protagonist been so haunted and harried by their own handheld technology. (Marija repeatedly bats away insistent callers with a brusque “I can’t talk to you now!”) The pernicious influence of social media is another prominent recurrent element in Blazevicuis’ screenplay, co-written with Marija and Tekle Kavtaradze, which — to occasionally monotonous and repetitive effect — piles complication upon complication (romantic, psychological, bureaucratic) as it happily puts both heroine and audience through the wringer.