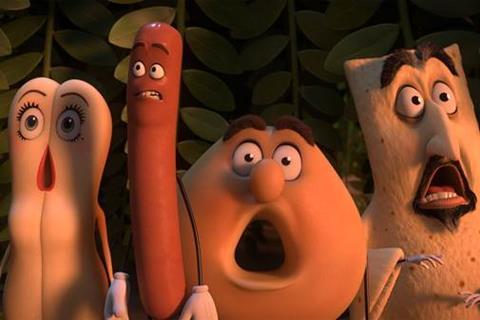 Creative partners Seth Rogen and Evan Goldberg’s best films — This Is The End and Superbad — lead with their raunchy, inappropriate humour but sneak in enough of an emotional undercurrent so that there’s real heart beneath the winningly crude gags. Sausage Party, which they wrote and produced, follows in those footsteps while pushing even more boundaries, offering an R-rated animated film that’s proudly politically incorrect.

Often, the randomness of the jokes is as sparkling as the execution, creating the sense that the filmmakers will try just about anything for a laugh — and the more shocking the better

This tale of grocery store food items who discover the horrible truth — they are destined to be devoured by humans — is consistently funny while also pausing to critique organised religion and racial disharmony in a way that’s smart but also playful.

The film features Rogen as Frank, a sausage waiting to be selected by human customers (whom he and his buddies call gods) so that he can be taken to The Great Beyond, a Heaven-like paradise. But after he and his sausage pals Barry (Cera) and Carl (Hill) are separated and Frank is left behind in the supermarket, he begins to wonder if what he and all the other food items have grown up believing about The Great Beyond is a lie. Maybe they are all about to be prepared by the gods and eaten. Alongside his girlfriend Brenda (Wiig), a hotdog bun, Frank goes on an odyssey across the shop floor to learn the truth.

Cleverly spoofing Pixar’s habit of crafting detailed ecosystems out of unlikely objects — like toys or cars — Sausage Party gets ample comedic mileage out of imagining how ordinary food items would view their existence. In the process, Sausage Party turns a simple grocery shop into a microcosm of human society. There are turf wars between bitter ethnic rivals — in this case, a Jewish bagel (voiced by Edward Norton) and a Middle Eastern lavash (voiced by David Krumholtz) — and disputes about whether or not to accept fantastical old stories as literal gospel.

Rogen and Goldberg, alongside cowriters Kyle Hunter and Ariel Shaffir, tease ethnic foods while simultaneously poking fun at their nationalties’ stereotypes. But the movie’s bighearted inclusiveness mostly serves to satirise how people (and food items) can allow fear and small-mindedness to blind us from how much we have in common.

That said, those life lessons — as they were in This Is The End (which was about growing apart from old friends) and Superbad (the fear of letting go of adolescence) — are delivered with a punchy irreverence that never allows Sausage Party to become sanctimonious. That’s a good strategy, considering that so much of the humour involves drug use, sex, bodily functions and off-the-wall pop-culture references. (Everything from Stephen Hawking to Terminator 2 to Stargate are parodied.) Often, the randomness of the jokes is as sparkling as the execution, creating the sense that the filmmakers will try just about anything for a laugh — and the more shocking the better.

Directed by Conrad Vernon and Greg Tiernan, Sausage Party zips along at 88 minutes, gags outpacing the plotting. Much like Pixar’s films, the film mostly consists of the main character going on a journey — in a subplot, Barry fights for his life to get back to the supermarket and reunite with his friends — and the somewhat episodic structure can yield a hit-or-miss comedic quality. But Sausage Party manages to build on its nifty premise and keep throwing new twists and set pieces at us, jumping around from comedy to action to horror with real skill.

The cast have a blast ripping through their dirty dialogue, especially Rogen as a foul-mouthed sausage who is thrust into the role of hero. None of the characters could be described as well-drawn, but Wiig makes for an appealingly uptight love interest, while Salma Hayek milks her role as a taco who is strongly sexually attracted to Brenda. Norton essentially does a Woody Allen impression as the worrywart bagel, and Hader cannily plays a Native American alcohol who serves as Sausage Party’s knowingly satiric take-off on offensive wise-old-Indian characters from countless Westerns. But the entire ensemble saves the best for last, joining in a finale that one might describe as orgasmic. Like the rest of Sausage Party, it’s absolutely filthy, which would be objectionable if it also weren’t so funny.