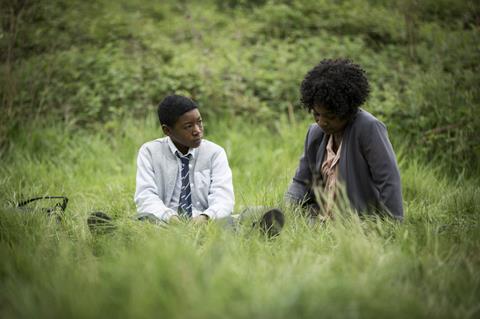 Playwright Debbie Tucker Green picks an intriguing subject for her film debut with Second Coming – literally, the modern-day miracle birth - but makes heavy weather of its execution, attempting elliptical narrative tacks which she can’t always sustain.  A fine cast, led by Nadine Marshall and Idris Elba, fleshes out the screenplay’s bare, jutting bones, even if Second Coming always seems like a better prospect on paper than onscreen.

Tucker Green, whose play Hang is currently at London’s Royal Court as Second Coming opens in limited release across the UK (it bowed at Toronto), is also the author of the plays Truth and Reconciliation, Born Bad, and Random, which she adapted for Channel 4 TV as a stand-alone piece.  She shows some mettle and ambition with her feature debut, making bold decisions with storytelling which is clear will tax her audience across 104 minutes, during which time it’s never quite clear whether she’s opting for mystery or allegory, or, even a manifestation of mental illness.

Upscale UK audiences familiar with her work and interested in a narrative jigsaw challenge will respond to Tucker Green’s characters, and Marshall’s performance in particular is demonstrably strong. It’s also a relief to watch a black blue-collar family make its way through London without being pegged to a social issue.

Jackie (Marshall) is the film’s central character, a secretive benefits supervisor who discovers she is pregnant, even though she hasn’t slept with her partner in months. Tucker Green never lets her characters discuss this fact, however, and the plot only becomes crystal clear when the film is as far along as Jackie’s pregnancy.  Initial conversations between Jackie and her best friend and co-worker (Whyte) are maddeningly oblique but still, for the most part, intriguing.

Jackie’s partner Mark, played with customary power by Idris Elba, is a devoted father to their sensitive 11-year-old son, JJ (Kai Francis-Lewis), although their own relationship is far from easy and he’s quick to show his temper. This working class family – Mark is employed on railways maintenance – carries on life as usual alongside friends and family as the secrets play out and Jackie is increasingly tormented by visions and manifestations (a storm, a nosebleed).

Marshall has a weight to carry here; Jackie can be silent and sullen and makes stubborn choices without the benefit of explanation. She’s a fine actress indeed, with Elba providing ballast. In fact, of anything, Second Coming is notable from the performances which Tucker Green draws from her entire cast. Visually, Second Coming flirts with extended sequences involving blackbirds which call to mind Steve McQueen’s work in Hunger, but never really gel, while Ula Pontikos’ camera gives the proceedings a dark, uneasy feel.