‘Shadow In The Cloud’: Toronto Review 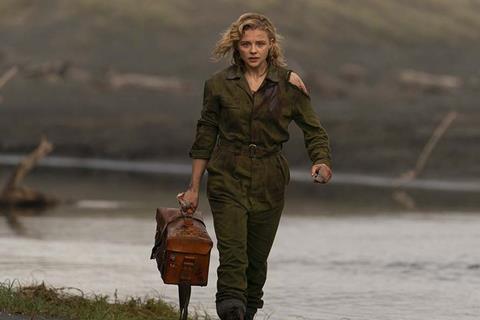 ‘Shadow In The Cloud’

A sufficiently motivated woman is a fearsome and unstoppable force: the central premise for this gleefully pulpy WWII horror puts a dash of feminist fury into a schlocky B movie set-up. In it, Chloë Grace Moretz plays Maude Garrett, a female flight officer with last minute orders to board a plane leaving from Auckland Allied Air Base. During an eventful trip, she must stand up against two seperate monsters. One is the patriarchy. The other is almost as tiresome and relentless. A combination of budgetary constraints and somewhat far-fetched plot devices means that this is a film with an elastic approach to credibility. But genre audiences prepared to embrace the exuberantly OTT silliness of some aspects should have fun with this collision of sexual politics and airborne peril.

This is the second fiction feature from New Zealand director Roseanne Liang (My Wedding And Other Secrets) and, with the casting of Moretz in the lead role, represents a move towards a more international profile. And while the film doesn’t quite deliver the requisite scares to fully engage with mainstream genre fans, Liang’s evocative sense of period and oppressive build of tension should attract attention.

The film channels its budget into the areas where it is most needed by keeping the locations to a minimum. Much of it takes place with Maude and the camera crammed into the ball turret on the underside of the plane, where the all male crew have shoved her to keep her out of the way during take off. But that doesn’t stop her having to listen to a torrent of casual sexism through the comms system. Having climbed onto the aircraft with a precious parcel, papers from high command and an English accent, Maude soon sheds the latter, and questions start to build about among the fractious crew about the first two.

But, as Maude unsuccessfully tries to convince them, they have more to worry about than the issue of whether or not her papers are legit. Japanese fighter planes are stalking them. And there’s another threat, closer to home. Something is on the plane with them, and its intentions are bad. With regard to this last, and without giving too much away, there’s a question to be asked about the motivation of the stowaway creature which seems intent on peeling bits off the fuselage until the plane crashes – with it, presumably, still on board. But then, this is a film which invites many piquant questions – how, for example, when Maude is forced to cling to the underside of the wing of a flying plane which is being strafed by bullets, does she manage to keep her hair so immaculately coiffed? Why, when the film is set during WWII, does the score feature so much 80s-inspired Morodor-esque synth? And would the moment shortly after the discovery of a clawed hellbeast bent on can-opening the plane to pieces really be the time in which members of the crew dive into an i- depth reveal about their relationship status?

Enjoyment of the film is inversely proportional to how much the audience cares about getting satisfying answers to these questions. And on how thrilling it is to see both monsters defeated using their own weapons.