‘She Had A Dream’: IDFA Review

A Tunisian activist fights for her rights and party 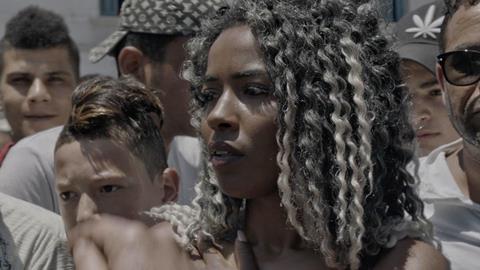 ‘She Had A Dream’

What doesn’t kill your spirit, makes you stronger in She Had A Dream. Built around charismatic Tunisian activist Ghofrane Binous, Raja Amari’s eye-opening documentary uses her life to expose the fault lines in a country riven with prejudices. Binous’ determination to be an agent of change lends the film an engaging, upbeat energy that enhances its appeal and should bring further festival invitations following a world premiere at IDFA.

Binous has spent her life refusing to be defined by prejudice. A young, working-class black woman, she has challenged the limitations imposed by others since her earliest school days. A sprinkling of memories give just a taste of what she has encountered: the school teacher who exiled her to the back of the classroom and slapped her; the hurtful nicknames received as a child; the taxi drivers who refuse to stop for a black woman; an incident of racial abuse when she worked as a flight attendant.

Now 25, Binous has turned to activism as a means of salvaging hope from her circumstances. We meet her in the summer of 2019. She has joined the secular Tahya Tounes party and is running as a candidate in the forthcoming parliamentary election.

The campaigning and countdown to election day gives structure to the story. Amari captures a compelling sense of Binous’ idealism and her place in the local community. Well-known in her working-class neighbourhood Essaida, she chats to everyone from shopkeepers to street kids and scene-stealing ne’er-do-well Zakaria. She is constantly talking politics, arguing her case, urging anyone and everyone to overcome indifference and make their vote count. She is a great advert for civic engagement. Her bedside reading is Michelle Obama’s ’Becoming’.

Binou’s engagement with the world around her also provides a portrait of Tunis and its citizens that spans crowded alleyways, bustling market places and airy rooftops. Binou is fighting for the party of President Youssef Chahed. Her personal charm might not be enough to counteract the reputation of a figure whom many now seem to consider toxic. She constantly encounters individuals whose enthusiasm for the revolution of 2010/2011 has fizzled into disillusion and disappointment with its leaders.

Binous presents herself to the world as a confident, invulnerable woman. Amari confirms that, showing her in conversation with former MP Salma Baccar and out on the campaign trail dealing with offers of support, moments of hostility and everything inbetween. She seems a natural born politician but there is also naivety there.

Amari balances Binous’s image with footage of senior party members discussing how unlikely it is that she will be elected. There is a suggestion that her status as a black woman may have mattered more than her experience when it came to choosing a candidate.

In some respects, She Had A Dream is a political coming of age story. The election result provides a reality check but Binous emerges wiser and more determined than ever to change the world. The way she starts to plot her next move ensures that the film maintains its positivity throughout.