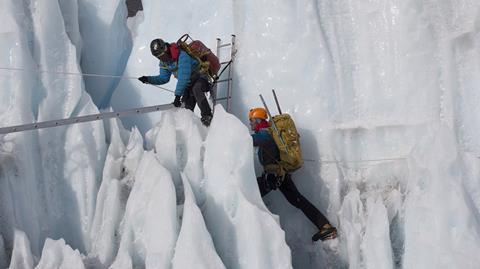 Veteran high altitude director Jennifer Peedom climbs Mount Everest to champion mountaineering’s overlooked figures: the Sherpas who do the dangerous work which keeps Nepal’s climbing trade running. The only factual effort competing for the Sydney Film Festival’s prestigious $60,000 prize, this stunning documentary initially sticks to familiar beats of endurance and adversity. When nature unexpectedly intervenes, however, Sherpa swiftly proves as grippingly human and political as it does visually spectacular.

Sherpa is certain to appeal to international audiences on multiple levels, a fact underlined by its Universal pick-up for all territories excluding Australia and NZ (where Footprint Films will launch in 2016). The film’s subject is topical and its timing is opportune, given fresh memories of the deadly avalanches which have blighted the Everest season for two years running.

When Peedom started shooting, Phurba Tashi Sherpa’s 2014 trek was her primary focus. A successful trip to the summit would mark his 22nd ascent, a world record feat pursued not for glory, but to make a living. Like many inhabitants of the area, transporting the equipment essential to wealthy Westerners’ attempts to scale the world’s highest peak is his most lucrative line of work. Phurba oversees a team of 25 who work for commercial tour operator Russell Brice, though he does so with the disapproval of his wife and family, who contend that no amount of money is worth the ever-present risk of death.

Their fears are given frightening context when tragedy strikes, a cruel stroke of fate changing the course of the film. April 18, 2014 remains the blackest day in Everest’s history, with 16 Sherpas killed at Khumbu Icefall. The documentary dives into the impact, implications and aftermath, and while it presents perspectives on either side, those who profit from local labour and lives aren’t afforded much sympathy, the Nepalese government included.

Dissecting the historical situation, the current-day circumstances and the hopes for a better future, the film favours the workers who strike for their rights to better compensation and insurance – but Sherpa is not a standard crusade for a cause. British journalist Ed Douglas voices the film’s historical narrative, which traces the image inspired by Tenzing Norgay six decades ago when he scaled Everest with Edmund Hillary and the stereotype of the smiling, helpful Sherpa was born. Now, aware of their marginalisation and mobilised by social media, those who follow in his footsteps strive to shake this reputation.

Initially motivated by another news-grabbing incident – a brawl between climbers and Sherpas in 2013 – Peedom’s aim was to call attention to the mountain’s unsung heroes, and she achieves her goal in breathtaking fashion. She knows the area – she shot Miracle on Everest there in 2008, and was the high altitude director on Everest: Beyond The Limits, while her most recent credit was co-directing Solo with David Michod. The camerawork on display here from Hugh Miller, Renan Ozturk and Ken Sauls, whittled down from 400 hours of footage, is jaw-dropping, even as the human rights issues at Sherpa’s centre will inspire exasperation. The canny combination of the two elements, with editor Christian Gazal seamlessly switching between time-lapse, snow-capped vistas and the faces of those affected, never lets viewers forget the perilous surroundings or the human cost.

In fact, scaling such heights has rarely felt so intimate and personal, both in the handheld footage and in the plight of the people that, in most other films, are left on the cutting room floor. Later in 2015, the fictional Everest will take an all-star cast to the mountain’s perilous peak; however when it comes to high altitude hijinks, Sherpa is the real deal.