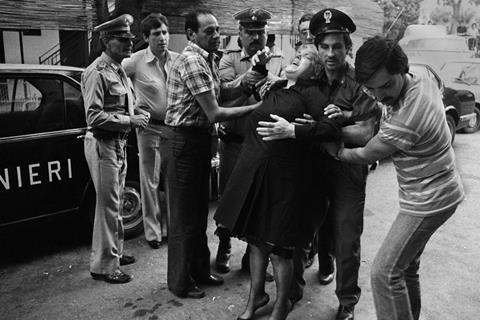 Director Kim Longinotto’s unerring eye for a great subject is underlined by Shooting The Mafia. Fearless photojournalist Letizia Battaglia has been an eyewitness to history in her native Palermo, capturing indelible images of the brutal atrocities of life under the Mafia. Her personal story, and the wider picture of a society living in fear, make for a compelling and moving documentary that is rich with commercial potential. Exhibitions, contextualising film seasons and more could all help raise the profile of the film, expand its potential audience and extend its life.

Born in 1935, Battaglia has some of the curiosity and ageless spirit of Agnes Varda. The two women even share a love for red hair dye. Longinotto begins by focusing on Battaglia’s photography; her stark, often graphic, black and white images capture a vivid sense of Palermo as a battleground filled with the casualties of poverty and crime. We see bullet-ridden bodies covered in sheets, crime scenes sprayed with blood, grieving widows at mass funerals, hard, haunted faces that stare straight through the lens. Her work is incredibly observant and evocative, filled with life, death, poetry and the hard truths of what she witnessed around her.

Battaglia talks candidly as she picks over the pieces of a life that could easily stretch to more than one film. In constant opposition to the men who tried to control or mould her, she recalls her father forbidding her from standing on a balcony in case she was seen by passing men. Marriage was an obvious escape route (“ I married the first boy who asked me”) but parental restrictions were replaced by a spouse who saw no point in her gaining an education.

Battaglia began taking pictures at 40, becoming the first female photographer in Italy to work for a daily newspaper. She saw her first murder three days into the job and vividly recalls the smell of the body and the fear spreading through a community. She endured death threats and assaults and only reluctantly concedes how brave and pioneering she has been.

Carefully structured around Battaglia’s photos, home movies and memories, the film also stages fond reunions with several of her former (generally much younger) lovers, who remain close friends. Longinotto also reaches for a bigger emotional register by incorporating footage from several Italian films that reflect aspects of Battaglia’s free spirit. There are moments that feel as if you are witnessing a Francesco Rosi drama and sure enough there is footage from Salvatore Giuliano (1962), alongside In Nome Della Legge (1949) and Anna (1951) with Silvano Mangano. The surging emotions are further reflected in a soundtrack that veers from the predictable (Volare) to the unexpected (Mahalia Jackson singing Trouble Of The World).

The film slackens its grip when it moves beyond the personal to a wider history of Mafia control in Palermo, tracing the assassinations of key judges (Falcone and Borsellino) and the eventual arrest of godfather Provenzano. Battaglia was a friend of Falcone but there is a slight sense that we are losing sight of her in trying to address the bigger picture. Ultimately, we do return to the indefatigable Battaglia having gained a deeper sense of what she has endured, the obstacles she has overcome and the courage she has shown in striving to create a “Sicily free from the Mafia”.