This time, Christmas really is the end of the world 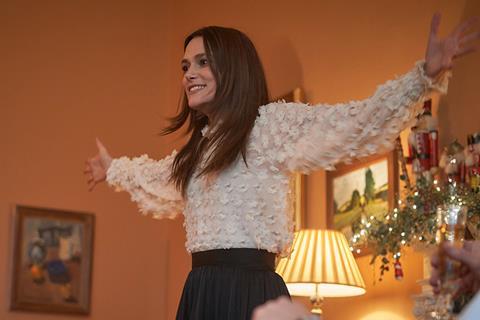 Holiday get-togethers are stressful enough — now imagine having to factor in the end of the world as well. The dark comedy Silent Night follows a group of longtime friends who gather for Christmas, knowing that humanity will soon be eradicated by a towering poisonous cloud sweeping across the planet. Writer-director Camille Griffin’s feature debut is a gutsy tonal mixture that both critiques the upper classes and delivers a growing sense of dread as doomsday approaches. But despite a game cast led by Keira Knightley, the film never snaps into sharp enough focus, ultimately blunting the story’s barbs and bleak message.

A Gala Presentation at the Toronto Film Festival, Silent Night is set for a December US release through AMC+ and RLJE Films. Knightley is joined by a talented ensemble that includes Matthew Goode and Annabelle Wallis, and the picture’s daring combination of post-apocalyptic drama and yuletide comedy may entice adventurous audiences.

Nell (Knightley) has invited her old schoolmates to her family’s posh country estate for Christmas, where they’ll toast the holidays and prepare to take the government-issued pill that will painlessly kill them so they can avoid the tortuous death that awaits once a toxic cloud descends. She and her husband Simon (Goode) welcome flirty Sandra (Wallis) and her ineffectual spouse Tony (Rufus Jones), kindly doctor James (Sope Dirisu) and his very young girlfriend Sophie (Lily-Rose Depp), and lovers Alex (Kirby Howell-Baptiste) and Bella (Lucy Punch). These friends reminisce about the past, discuss their regrets and start preparing for the inevitable which is only hours away.

Griffin sets up the audience to believe this will be a Peter’s Friends-style holiday film in which the laughs and tears flow as freely as the champagne. But soon Silent Night starts dropping hints that this won’t be an ordinary Christmas soiree: a buildup of unchecked environmental ills have contributed to the global crisis that will soon snuff out humankind. Nell and her friends aren’t holding out hope that somehow the powers that be will save them — it’s merely a matter of enjoying the scant time they have left alive.

The cast exudes the easygoing rapport of old pals, complete with inside jokes and cliquish behaviour. (Sophie, who didn’t grow up with them, feels like a permanent outsider, the other women resenting her youth and dismissing her opinions.) Unfortunately, this 90-minute film doesn’t have enough space to establish individual personalities beyond a few broad strokes. Wallis’ Sandra is vain, while Howell-Baptiste’s Alex self-consciously drinks to overcome her social anxiety. And although one senses their privileged positions, these characters aren’t so monstrous or self-absorbed that they necessarily feel deserving of a cosmic comeuppance — and, conversely, they’re not quite layered enough to elicit our sympathy for their impending demise either.

Intriguingly, there’s not much conflict in Silent Night, save for a couple of revellers who don’t want to take the suicide pill. One of them, Nell and Simon’s precocious boy Art (Griffin’s actual son Roman Griffin Davis), would rather take his chances surviving the toxic cloud, paranoid that the government may be overselling the storm’s fatal force. But the differing points of view fail to add up to much drama. Silent Night works best as a grim chamber piece that subverts the season’s usual good cheer — or, depending on one’s temperament, serves as a tart distillation of the nagging gloom those who hate the holidays often feel.

Lorne Balfe’s ominous, epic orchestral score adds to the unsettling mood, sending off humanity with a mighty dirge. And even if the characters are thinly drawn, the cast deftly transitions into a more somber key as the toxic cloud approaches. (Knightley is especially good as a mother struggling to know how best to conduct herself in such impossible circumstances.) In Silent Night, even the wealthy hiding out in their lush estate aren’t immune to the reckoning that will come to everyone, and Griffin’s dispassionate outlook is subtly bracing — all these people’s petty hangups and minor recriminations mean nothing in the face of oblivion. But the film’s ideas and ambitions prove more compelling than the story itself. One would probably wish for more riveting company at the end of the world.