The Rock meets a high place 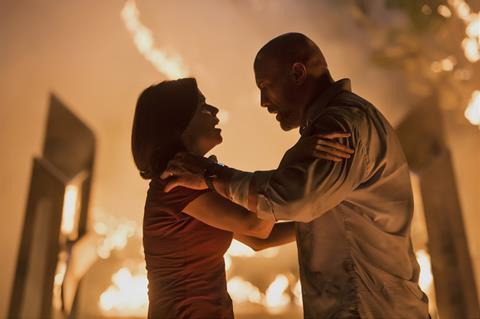 The junky, energetic popcorn thrills of Skyscraper recycle everything from Die Hard to The Towering Inferno, pillaging plot points and action beats from movies as varied as The Fugitive, The Lady From Shanghai and Mission: Impossible – Ghost Protocol. Anyone expecting a shred of originality from this Dwayne Johnson vehicle will be disappointed, but writer-director Rawson Marshall Thurber tries his best to compensate by amping up the over-the-top spectacle, hoping sheer gusto will keep viewers from minding his film’s shaky foundation.

This thriller rifles through decades of Hollywood tropes, never pausing for breath

Arriving in theatres across the planet by July 13, this Universal offering will ride the commercial coattails of its muscular star, who has had a string of recent action hits. Skyscraper’s familiarity could be a sizable asset, and reviews acknowledging the story’s giddy multiplex pleasures could help boost word of mouth.

Johnson plays Will, a former FBI agent who became a security advisor to private companies after a botched law-enforcement operation left him with a prosthetic leg. Now happily married to a Naval surgeon (Neve Campbell) and raising twins, he takes a job in Hong Kong, where he consults on The Pearl, a brand new skyscraper which is the tallest in the world. But when a dangerous terrorist (Roland Møller) infiltrates the building, starting a deadly fire within the high-rise, Will must stop him while rescuing his family, who are trapped in the blaze.

Thurber (We’re The Millers) last made the action-comedy Central Intelligence, also with Johnson, but Skyscraper represents a move towards more overt summer-tentpole cinema. The filmmaker’s glee at dreaming up a lavish 225-story skyscraper full of different environments, each of them ripe for action sequences, can be quite appealing. (Lensed by Oscar-winning cinematographer Robert Elswit, Skyscraper has a funhouse quality as Johnson goes from one seemingly impossible obstacle to the next, whether inside the building or dangling precariously outside of it.) Even Skyscraper’s shameless derivativeness has its moderate charms — this thriller rifles through decades of Hollywood tropes, never pausing for breath.

Will has been given the briefest of backstories, and Johnson brings vulnerability to the role as the character risks his life repeatedly to save those he loves. Skyscraper will most often be compared to Die Hard, but where Bruce Willis’ everyman cop felt believably mortal, despite the incredible (and improbable) heroics he had to undertake. Johnson’s larger-than-life demeanour both emphasises Skyscraper’s bigger-is-better approach and the limitations of the film’s cartoon-y outlandishness. As delightfully, ridiculously escapist as Skyscraper can be — Will nearly dies several times as he jumps, crashes and hurtles through the air, gravity be damned — the utter lack of reality (not to mention smarts) ultimately leaves the film feeling shallow and disposable.

Generic villains and some gimmicky plot points also hamstring Skyscraper. (Will’s prosthetic leg and his child’s asthma quickly become narrative devices to create cheap complications for our heroes.) Thurber concocts several nifty sequences built around the terror of falling from a great height, but there’s a sloppiness to the storytelling that makes room for so many convoluted and convenient twists that Skyscraper rarely has the bracing inspiration of its influences.

Campbell acquits herself decently, lucky to be given a character with some dimension, rather than just being trapped in the standard wife-in-peril role. She and Johnson have enough time to establish some decent chemistry so that, when The Pearl goes up in flames, we’re actually invested in her predicament. Meanwhile, Chin Han exudes a stoic authority as The Pearl’s billionaire developer who will, reluctantly, find himself drawn into the action.

As is often the case with his films, Johnson provides Skyscraper with a likeable rooting interest, and it’s hard not to be swayed by the actor’s understated humanity and fierce commitment to the role’s physical demands. But just as he demonstrated in other recent offerings such as Rampage, Johnson has a tendency to outclass his threadbare material, requiring him to do so much heavy lifting that the effort doesn’t seem worth it. Johnson is Skyscraper’s greatest spectacle, but no matter how many bad guys he dispatches and dangers he overcomes, he can’t escape this film’s competent, second-rate execution.