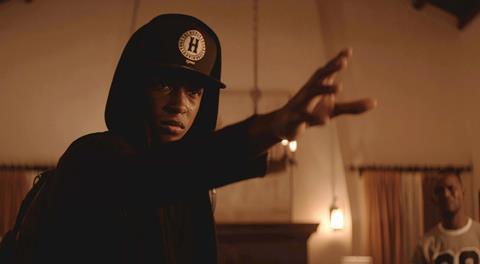 Sleight is a first feature about a street conjurer who gets caught up with drug dealers. It has plenty of heart and lots of fighting, but could use a little more magic.

The hero of Sleight is Bo (Jacob Latimore), a skilled magician with an inventor’s knack for taking his talent into electro-mechanics. Both of his parents are dead, and Bo is the sole support for his young sister, the adorable Tina. But bills are hard to pay with card tricks, so Bo sells coke. Things get complicated when the ruthless dealer Angelo (Dule Hill) brings Bo into his crew.

Sleight, filmed on a slight budget, is an odd amalgam, a gangster drama set on the streets, with a protagonist who solves his problems with magic tricks. Think of the 1970’s TV character McGiver, as a young African-American with a deck of cards. He can pick anyone’s pocket – and does – but he can’t get himself and his daughter out of the ghetto and into a better school system. It’s a bad-ass movie, oozing with blood, yet can be cloyingly earnest and wholesome at its core, so much so that Dillard’s debut sometimes feels like an audition tape for Disney.

Even without any explicit sex, there’s plenty profanity and violence to keep the movie out of the reach of pre-teens in theatres. Yet the element of magic – handled skillfully by Latimore and by Dillard, a magician since childhood — is enough of a novelty and an expansion of the gangbanger playbook to give Sleight some legs. It will take more to generate interest for the film outside the US.

Parallel to the drug-dealing plot is a love story. On the street performing, Bo meets Holly (Seychelle Gabriel), who is beaten back and blue by her alcoholic mother. Holly bonds with Tina, but Bo’s debts to Angelo throw him into a race to pay them back. When Bo misses the deadline, Angelo’s gang kidnaps Tina.

The script by Dillard and producer Alex Theurer has a novel solution to their hero’s dilemma. He wires himself up for telekinetic powers. The movie pivots, and the Houdini of the Hood emerges as a superhero who can turn bullets around with a flash of his hand.  It’s some improbable and awkward street juice for a device that the Greeks called deus ex machina.

Just in case any odd turns in the script take the audience by surprise, they’re clarified by clunky expositional telegraphing. “I thought that this work would be only temporary,” Bo confides to a well-meaning neighbor, “a year flashes by, and I’m still a drug dealer.”  Later we get a step-by-step explanation of how a human arm can be wired for telekinesis. It’s amazing what you can learn from a drug dealer in the right movie.

As Bo, newcomer Jacob Latimore lifts the film above a gang drama assembled from elements taken off the rack. The young actor has an appeal in close-ups by cinematographer Ed Wu, as does Gabriel. Storm Reid, endearing as Tina, will connect with audiences anywhere.

Sleight shows the strain of making a first feature on a shoestring and in a hurry. If the film wins Dillard friends, as it may on the festival circuit, he could get to make the bona fide science fiction movie that it feels he has his sights on.