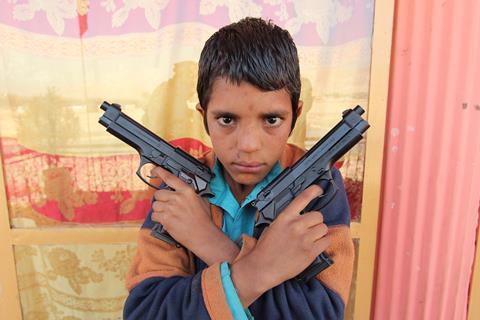 George Gittoes’ Jalalabad-set documentary Snow Monkeys is an unusual and fascinating film, although its focus can flap around and flag during an extended 148 minute running time (presented at IDFA in a trimmed-down version from its 169-minute Melbourne launch). His Dickensian stories of hardscrabble children, some of which are hard to take in, provide a street-level view of young lives lived under unrelenting siege.

An ever-present Gittoes can lionise his own efforts. (“All Afghans love him”, we are told)

The Australian director and war activist, winner of this year’s Sydney Peace Prize, positions himself at the centre of events in Snow Monkeys, occasionally playing around the edges of fact and fiction as the street children set about making a film of their own (a continuation, in a way, of the style of his 2007 film Miscreants of Taliwood, shot in the Northwest Frontier Province of Pakistan).

In 2011, Gittoes set up his Yellow House art collective in Jalalabad, Afghanistan’s second city, and also a Pashtun area, where, amongst other things, he has been making Pashto films. That’s how he met these unforgettable children. There’s no doubting the authenticity of the stories he presents here, or the footage, including from a bombed market square, shockingly captured by a 13-year-old boy. Some sequences seem less naturally captured than others, but the film is undoubtedly truthful, even if Gittoes seems to take the local Taliban chief at face value and some of the footage tends to lionise his own efforts (“All Afghans love him”, we are told. And there’s certainly a lot of Gittoes here to love.)

The children are given cameras and ‘empowered’ to make their own story, but the street children of Jalalabad are almost the definition of powerlessness, caught in a vice between war, drug addiction, and crippling poverty. They are mostly from kochi, or gypsy, nomadic families, and work to feed their siblings, like Gul Nina, the most clearly Dickensian character of them all. Aged six, she goes daily with her three-year-old brother to pick through the rubbish, while Irfan, one of the film’s heroes, provides for his seven siblings while his father remains a hopeless heroin addict.

There are three gangs featured here – the titular Snow Monkeys, so-called because they sell ice cream. The Ghostbusters wave smoke to banish bad luck, while a gang headed by the pint-sized psychopath Steel terrorises them all, and many more besides. Steel is a fascinating presence in the film, as tough as his name and given to scarring his victims with the razor blade he keeps in his mouth.

Gittoes offers Steel a chance to be part of the film the Snow Monkeys are making, and, partially captured by actor Amir Shah Talash on camera duties, the young hard-man practices his fight moves. All the while, helicopters and armoured tanks hold the city in a surveillance vice, and IS is lurking nearby. Even as most of the locals seem unified in blaming close neighbour Pakistan for their woes, the film realises that this bad situation can even get worse.

Although Gittoes is an award-winning artist, his film does not easily classify as an art film per se, veering more towards post-modern agitprop.  The Yellow House Collective, first established in Australia in the 1970s, has an old-fashioned hippy-ish feel, as does Gittoes himself.  It seems almost preposterous to find this set-up in Jalalabad, yet at the same time perfectly right that he, his wife, and their well-meaning collective are here, in the middle of the madness, in the strange twilight world of lost and found children. And doing something about it.