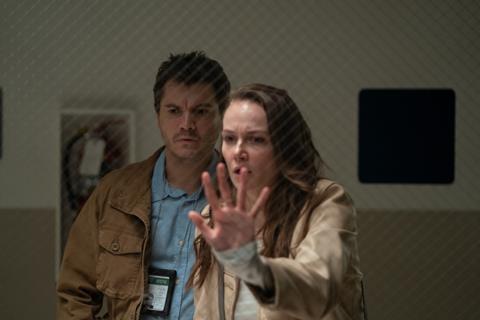 There’s a question mark over the mental health of Laura (Andi Matichak), a single mother who claims to have seen a group of strangers looming over the bed of her sleeping son, David (Luke David Blum). But there’s no doubting the severity of the mysterious disease that strikes David down just a day or so later. Laura’s desperate search for answers leads her to the darkest reaches of her own past, leaving a trail of gory devastation in this sinewy horror road movie. There’s a slippery inconsistency in the timeline of this picture which doesn’t entirely hold up to scrutiny, but the commitment to blood-vomiting, entrail-chewing special effects, and the niggle of child peril anxiety makes for an effectively propulsive genre picture.

Full rein to the sleaziest impulses of the design department

Irish writer-director Ivan Kavanagh returns to the Dublin Film festival with the US-set Son having previously scooped prizes there for his feature debut, Tin Can Man (2007), and a follow up, The Fading Light (2009). Here, he revisits the horror genre, which he most recently explored with The Canal (2014). In the absence of the physical midnight movie festival slots in which the picture might have found a natural home, VOD platforms seem a likely destination. Genre streamer Shudder holds UK and Irish rights, and will partner with RLJE for release in North America.

The film opens with a jagged little stab of panic: a very pregnant woman, barefoot and bedraggled, is fleeing in a car, chased by two faceless men, the score a pounding industrial pulse of fear. At first, her terror is as much directed at the child - who she births into the footwell of her vehicle - as her pursuers. Then she looks into the face of her newborn and a surge of maternal love kicks in.

Fast forward several years and the woman – Laura – seems to have escaped whatever trauma it was that she was fleeing. The boy is a bright, cheerful kid around the age of eight; their home is innocuously suburban. But the deceptively soothing score is a warning to horror-literate audiences that all is not quite what it seems.

Having seen – or imagined – the intruders in her son’s room, Laura finds a sympathetic ear in Paul (Emile Hirsch), one of the two cops sent to check her home for signs of forced entry. Paul happens to be there when David is first taken ill, with an array of symptoms which range from weeping sores, flayed patches of peeling flesh and projectile vomiting what looks like congealed blood. The doctor is nonplussed, and the hospital, viewed through the lens of post-Covid-19 paranoia, seems somewhat lax about the whole thing. So much so that Laura, suddenly aware of the threat of figures from her past, is able to break her son out of the ward with minimal hassle. Her headaches are just beginning however, as when she briefly leaves David in order to pack some essentials, and returns to find that he has eaten part of the babysitter.

Laura’s journey to rediscover the truth about her own childhood, as part of a demonic cult, gives full rein to the sleaziest impulses of the design department. Flyblown motels and the deranged décor of damaged cult-survivors forms the backdrop for the rest of the story, with doe-eyed Paul in pursuit. The film’s final twist is somewhat less persuasive and effective than the relentless grimness of the picture’s oppressive atmosphere.