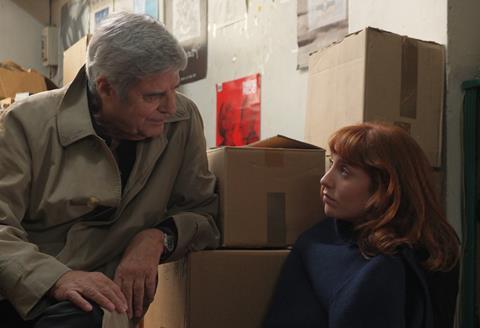 A lilting ode to serendipity and the consequences of long-ago actions, writer-director Elise Girard’s bittersweet comedy Strange Birds (Drôles d’oiseaux) is a modest but delightful mystery that interweaves romance, literature, ecological concerns and the eternal beauty of Paris with a light touch.

At her best, Girard deploys a deadpan humor of attrition, as if Jim Jarmusch had a female French cousin. Already sold to Japan, where Girard’s Belleville Tokyo was appreciated, this Berlin Forum premiere is a compact treat for viewers who enjoy fanciful behavior in appealing settings.

Wide-eyed provincial Mavie (Lolita Chammah), freshly arrived in Paris from her native Tours, is sleeping on the couch of her childhood friend (Virginie Ledoyen) whose gung-ho lovemaking with her married boyfriend is so loud as to suggest blaring speakers. Mavie keeps a journal and sometimes reads from it in voice-over, filling us in on the details of her life. Strident bird sounds can be heard and, now and then, a dead seagull drops from the sky with a disconcerting thump.

Mavie spots an ad in the café she frequents, offering a studio apartment in exchange for working in a bookstore in the Latin Quarter. With no qualifications to speak of, Mavie falls into a position with pushing-80 Georges (perfectly cast vet Jean Sorel), in his dusty-but-charming shop that has plenty of books but no customers. Georges is such a terse contrarian that should a potential customer venture in, they are soon scared away; it’s unclear what’s keeping this business afloat.

Chammah, who appears in another Berlin Forum title, Barrage with her mother, Isabelle Huppert, here briefly but memorably shares the screen with her father, Ronald Chammah, playing a semi-threatening figure who enters the bookstore in one position and exits in another.

A tentative romance emerges between Georges and Mavie although the five-decade age difference makes them both a little sad. Then there’s the matter of Georges’ mysterious past and the sudden increase in gunslinger-style men barging into the store. Newspaper headlines provide casual clues to ecological mischief, while film references are subtle and warranted; particularly a showing of a specific Sidney Lumet movie at which Mavie meets her male seatmate (Pascal Servo) when he loans her his handkerchief.

The non-intrusive and wonderfully varied score by Bertrand Burgalat is a plus, and DP Renato Berta manages to skirt cliché while rendering the casual magnificence of workaday Paris including evocative shots of bridges at dusk. The use of iris in and iris out is a nice touch

Production companies: A KinoElektron production in coproduction with Reborn Production and Mikino