‘Striding Into The Wind’: London Review

‘A Chinese slacker story with a very cinephile flavour’ 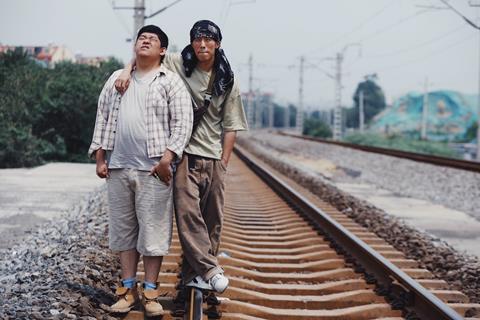 ‘Striding Into The Wind’

Providing further fuel to the argument that hipsterism is essentially the same the world over, here comes Striding Into the World, a droll and suitably laid-back Chinese slacker comedy with a very cinephile flavour. An autobiographical debut feature from writer-director Wei Shujun, it was included in the Cannes Festival’s 2020 Official Selection after his short On the Border won the Special Jury Distinction Award there in 2018. Now launched on the festival circuit with slots in London and Busan, this enjoyable, sweetly idiosyncratic feature looks set to flourish in niche sectors, but may play more widely than most Chinese features as it should also appeal to admirers of the hangdog comic school of Jarmusch, Kaurismäki et al.

The antihero of this languidly paced picaresque tale is policeman’s son Kun (Zhou You), who is studying to be a sound recordist at film school in Beijing – like Wei Shujun himself not so long ago. Volatile, feckless and not exactly the type to see things through, the rebelliously coiffed Kun is first seen storming out of his driving test, but goes on – driving license be damned – to buy a clapped-out Jeep, as Wei once did, with which he dreams of taking to the open road in Inner Mongolia.

In the meantime, though, Kun – constantly on the wrong side of his sound tutor – is working with his easy-going boom operator buddy Tong (Tong Linkai) on a student film by pretentious director Ming (Wang Xiaomu). This nattily dressed would-be visionary is constantly invoking the names of his auteur gods Hong Sang-soo and Wong Kar-wai. Not that the film he’s making – about a young Mongolian woman searching at a fairground for her errant man – seems to resemble their work a great deal, but their example seems to be Ming’s lofty excuse for not writing a script.

On the side, Kun tests the patience of his girlfriend Zhi (Zheng Yingchen), who works as a hostess at upmarket hospitality events, and he earns money selling stolen exam papers as well as working for a construction boss who has a vanity sideline as a singer specialising in sci-fi disco concept albums. The scenes in which Kun and Tong wearily get rid of the CDs they’re supposed to be selling for him make for the film’s most quintessentially slackerish strand.

The film is elegantly dry-humoured about the film-making game – especially in the closing section, as Kun, Ming and co head to Mongolia for reshoots – and it has a nicely downbeat streak of semi-slapstick, whenever Kun has to avoid cops on the road. Specialising in slow-burn long takes, Wei Shujun and DoP Wang Jiehong play some neatly-turned visual tricks, notably in a mall, as the camera follows Kun’s lift downwards and suddenly reveals a dance troupe that wasn’t visible before. The visual style also ingeniously milks the road movie element, with assorted sequences strikingly shot through car windows, at one point looking out on total darkness as Kun goes recklessly headlight free.

With its depiction of a contemporary China where everything seems to boil down to the vagaries of capitalism, Wei Shujun’s worldview isn’t a million miles from that of Jia Zhangke, especially in his earlier films about social outsiders; his generally detached style isn’t that different, either, albeit in a deadpan comic vein. Multiple characters are briskly sketched, often most vivid when they do little, or are seen from a distance, like Ming’s languid and unexpectedly amorous lead actress. In the lead, Zhou Yu impresses as a likeable rascal whose characteristic mode of being oscillates between manic and altogether out of it, his blank stare making him a sometimes infuriatingly vacant observer. And you can’t help admire director Wei’s comic self-deprecation in making his autobiographical alter ego such an out-and-out dope.