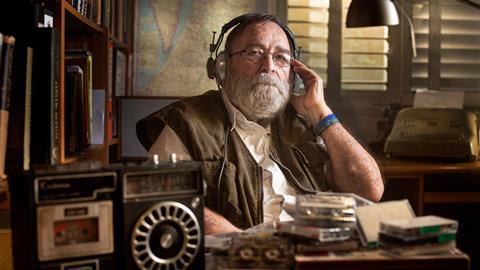 Although currently ever more in vogue, investigative documentaries often raise questions about the methods and purposes of inquiry – both by the films themselves, and in the investigations they recount. Those themes prove typically thorny in Israeli feature Tantura, but Alon Schwarz’s feature opens up a wider debate about Israeli history and about how a nation preserves its official self-image beyond the specific case examined. The film will stir up controversy, both in Israel – where its subject has already been the focus of much debate – and at Sundance, where it plays the World Cinema Documentary Competition. It will clearly be a draw for platforms and festivals, especially those with a political or human rights focus.

Schwarz – known for his 2016 Holocaust-themed documentary Aida’s Secrets - takes as the documentary’s central figure Teddy Katz, an Israeli man who in the 1990s undertook a MA research project to investigate events at the Arab village of Tantura in 1948. These happened in what Israel remembers as the War of Independence, but is known in the Arab world – opening captions point out - as ‘Al Nakba’, meaning ‘catastrophe’, during which Arab populations were moved out of many towns and villages in what had become Israeli territory. Official Israeli history, the film tells us, has it that these populations moved of their own accord, rather than being forced out. Katz – credited as one of this film’s researchers – undertook an investigation in which he interviewed over 130 subjects, both Jewish and Arab, with suggestions emerging that illicit killings were committed at Tantura by Israeli soldiers, even that there was nothing less than a massacre – involving, one commentator suggests, as many as 280 dead.

Interviewed by Schwarz – who appears onscreen talking to Katz, and listening to his original tapes – Katz reports that a number of former soldiers from the Israeli army’s Alexandroni Brigade told him that a massacre had taken place, but later denied it, seemingly under pressure from other veterans (conversely, we also hear about brutalities committed on the Arab side). Some veterans sued Katz for defamation: in the ensuing court case, Katz claims that he was effectively silenced by the presiding judge, Drora Pilpel. He retracted his claims about Tantura, apparently under pressure, then recanted, although Pilpel refused to let the trial resume (she too is interviewed by Schulz, and is manifestly surprised by what she hears when he plays Katz’s tapes).

Tantura follows the story through interviews with surviving veterans and former Arab residents of Tantura. Schwarz also talks to academics: some are dismissive of Katz’s findings and methodology, while others, like Hillel Cohen and Ilan Pappe, defend Katz and discuss the implications of the case. Pappe argues that the events in Tantura were covered up as part of a drive by Israel’s then prime minister David Ben-Gurion to present the nation’s actions in 1948 in a favourable light, not least by inviting an MGM newsreel crew, which shot a bowderlised reconstruction of the conflict at Tantura. For Pappe, it was all about sustaining the image of a scrupulously moral army, a foundation stone of Israel’s national self-image.

The film is partly about the events at Tantura, partly about the suggestion that Katz was silenced and ostracised. When academic Yoav Geller – a Katz sceptic, to say the least - questions the very value of oral testimony as reliable evidence, it’s a question that has applications both for academic investigation and for films like this. Schwarz’s viewers must make their own interpretations of the nuances, equivocations and sometimes startlingly direct confessions from his elderly interviewees: while some are evasive, or deny misconduct on the Israeli side (“That’s not who we are,” one says), others are outspoken about what they did as young soldiers. One man says he never spoke to his wife about his war experiences: “What would I tell her, that I was a murderer?”

As per a convention of documentaries in what one might the ‘historical true crime’ vein, Schwarz seems to nudge us towards being receptive to shock revelations. He moves beyond oral testimony when he enlists a landscape scientist to scan historical images of the terrain around the former site of Tantura, to help determine whether a certain place, now a parking lot, is or was the site of a mass grave. This inquiry proves inconclusive, however; but it should be said that some commentators who have questioned Katz’s methods and rejected evidence of a massacre per se nonetheless agree that atrocities were carried out by Israeli soldiers in 1948.

Beyond the mystery that Tantura appears to tell, however, are larger questions, to do with the problems of memory, testimony and time, and the ways in which nations tend to reject stories that counter the reassuring official narrative. Tantura makes for a fascinating, troubling watch, although it doesn’t altogether come across as rigorously objective, given rhetorical touches in both music (ominous ambient drones, ironically boisterous kibbutz songs) and visuals (thriller-style close-ups of Katz’s cassettes playing, a pointed insert of a see-no-evil monkey statuette). Fascinating throughout, however, are the interviews with the aged veterans who provide varying accounts of their personal innocence, culpability or complicity; and, at the end, with two elderly kibbutz residents who offer strikingly opposed views to the idea that national recognition of historical wrongs done to Israel’s Arabs might provide an appropriate start to a process of reconciliation.