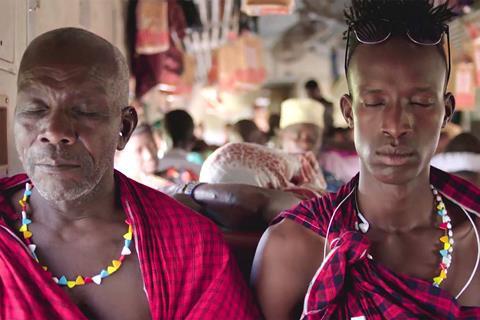 A simple train journey yields rich insights into the struggles endured by ordinary Africans in Tanzania Transit. The running time is compact and the setting is confined, but Jeroen van Velzen’s discretely observed documentary finds a whole world of stories and emotions within the confines of a few swaying, crowded railway carriages. Enthusiastic festival exposure should follow its Tribeca world premiere, where it plays in documentary competition.

Van Velzen begins the journey by emphasising the outlook available to those within the train as it travels across Tanzania. Dry, dusty countryside crawls past, the human presence swells as the train reaches a stopping point and people appear at the side of the tracks selling food and water. It almost feels as if the views are being framed, providing the passengers with a living cinema screen and a window on the world. Maasai tribesman Isaya is travelling home with his grandson William and is constantly delighted by what passes before his eyes. The lurching, jostling movements of the train remind him of a donkey ride.

Van Velzen provides a flavour of the teeming life on board; the cleaners and cooks, the megaphone used to announce that food is now served, the passengers sleeping in corridors and striking up conversations with sympathetic strangers. It is a gently beguiling slice of life but what soon becomes apparent is the way that what lies inside the train serves as a microcosm of the wider world.

Isaya and William are travelling in the poorest section of the train. William is an actor and dancer trying to make his mark in Dar es Salaam; he is committed to life in the city and sees no reason to return to his homeland. His grandfather cannot understand his desire for fame and fortune rather than the hard currency of land and livestock.

Single mother Rukia travels in relative comfort and has stories to tell of betrayal, a deceiving husband and the sheer hard work required to just stay alive. In first class, we meet Peter, a former gang leader turned preacher who travels through the carriages offering to heal the sick, cast out demons and spread the word of Jesus. There is also an opportunity to purchase his book at a bargain price and the sense that he is a complete charlatan.

The individual stories are fascinating but collectively they paint a picture of a society governed by poverty and prejudice, torn between traditional and modern and where corruption is rife, misogyny is commonplace and those at the bottom of the ladder suffer the most. Van Velzen celebrates the mere fact that people have survived and endured against hefty odds and remain focused on the future rather than shackled to the past. Fragile victories are hailed as significant achievements.

The train of Tanzania Transit is a place of confessions and confidences, confrontations and harsh realities. It is a film in which hard truths are subtly revealed rather than bluntly spelt out. The soft trumpet notes and Ry Cooder-ish guitar twangs of Christiaan Verbeek’s understated musical score only enhance the film’s poignant mood.