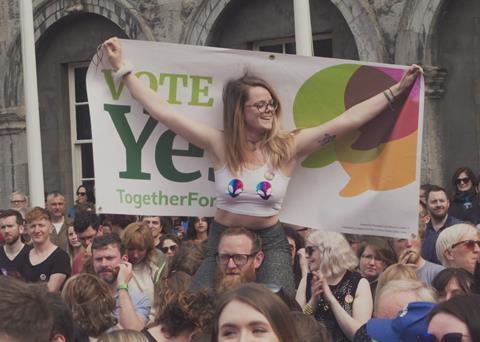 We’re so used to ‘burning issue’ documentaries sounding dire warnings in the face of calamity that it comes as a shock to find one telling an unmitigated story of triumph. Irish feature The 8th is such a rarity, although its happy ending comes after a long history of suffering. The work of three directors with a significant track record in film and TV documentary, The 8th follows the successful campaign to repeal Ireland’s notorious Eighth Amendment proscribing abortions.

Focusing on key figures in the ‘Yes’ campaign to repeal the amendment, and outlining the history of the struggle for abortion rights in Ireland, this film is an informative, polished and bracingly upbeat production. Premiered online in Hot Docs and now coming to Galway, The 8th will appeal to a range of platforms beyond those with feminist, human rights and political focuses, and is likely to prove highly durable as a historical and social document.

The film begins by outlining the history of the Eighth Amendment, voted for in a national referendum of 1983,  which stated that the unborn in the womb has equal rights as its mother (as the film shows, the term ‘unborn’ was contentiously left undefined in the terms of the amendment, according to which a fertilised ovum is per se definable as a human being). The controversy over the Eighth was such that, as one commentator puts it, it came to represent a “second partitioning of Ireland.”

A referendum to allow abortion where there was a threat to live was narrowly defeated in 2002. The film focuses on the lead-up to a further referendum in 2018, in which the amendment was at last overturned. The central figure is Ailbhe Smyth, head of the Coalition to Repeal the Eighth Amendment and a veteran feminist activist in Ireland, whose cheerfully inspirational energy gives the film a propulsive narrative thrust. Emphasising the charismatic face of the movement, the film also follows a younger activist, nail bar owner Andrea Horan, who argues that you can be committed and fun-loving. Her prominence in the film bolsters its feelgood approach – sometimes underlined with an over-emphatic score - but that’s perhaps the necessary sugar coating on an otherwise altogether serious-minded project.

While they focus on the Repeal activists, the film-makers also give space to arguments from the other side, which don’t always conform to expectation. Early on, we see Repeal campaigners confronted by opponents voicing Catholic dogma; one tells a young woman, “It’s not your body – God created you.” Later, however, the film presents the more considered arguments proposed by recent defenders of the Eighth, notably radio journalist Wendy Grace, whose own arguments for the amendment strike an unexpectedly feminist note.

Meanwhile, John McGuirk, communications director of the Save the Eighth campaign, offers some intriguing thoughts on the tenor of the opposition’s campaign, which he feels would have been better taking a more aggressive approach rather than adopting a “happy clappy tone” (an epithet that could be applied to passages of the film itself). Indeed, one of the most insightful aspects of The 8th is precisely its emphasis on PR strategy, never taking it for granted that the Repeal cause speaks for itself, but showing how it needs to be carefully promoted so as to persuade the undecided middle ground of Irish voters.

One element that proves decisive in the Repeal campaign is its appeal to the memory of Savita Halappanavar, a young woman who died in hospital in 2012, as a result of not being able to have an abortion. Her case forms part of the film’s background chronicle of social horrors, notably taking in the scandal that erupted in 2017 when bones of dead children were found in the grounds of a home for unmarried mothers in Tuam, County Galway. Such stories – evoked with archive images and sharp graphics using newspaper headlines – give a focus to what one Repeal campaigner, talking of what the new referendum has brought into the spotlight, terms a “social history of how Ireland has treated women.” This is complemented by a montage of voices of women recounting their personal experiences – the force of this sequence rather adulterated by its accompaniment of prettified aerial shots of rolling landscapes.

Despite its softer touches and somewhat digressive structure, the film sustains a suspenseful narrative line in its countdown to the voting day of May 25, 2018 and what Smyth calls “a huge collective national moment of catharsis.” The story may have ended in cathartic closure for Ireland, but its example offers a potent message at a time when thirst for local and global change is mobilising new generations to a seismic degree.