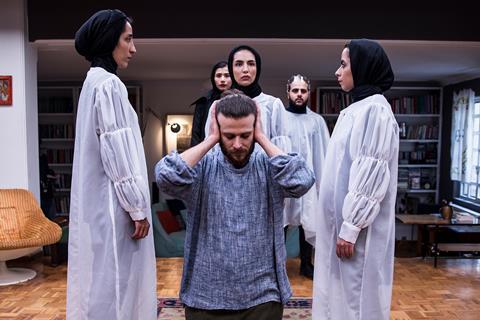 A theatre company gathers in the home of the director to rehearse a scene from an experimental production of Macbeth. Before the day is out, they hope to film it as a taster to be submitted to the Edinburgh Festival. But the director (played by the film’s real-life director, Arvand Dashtaray) is working remotely, barking capricious criticisms over videolink. And tensions and secrets between the actors threaten to upend the rehearsal before it even gets going. What could have felt like a one-act play (Dashtaray’s background is in theatre) is given a bracingly dynamic energy by the decision to shoot the entire film in a serpentine single shot, showcasing both Dashtaray’s accomplished staging and the high quality of performances throughout.

Each character has their own hint of a subplot

It’s fair to say that the formal approach elevates the slightly pedestrian plotting. The Absent Director starts as a fairly routine unpicking of sexual tensions and marital infidelities, but takes an intriguing turn when a key character is discovered unconscious, steering the drama into the nervy uncertainties of a thriller. The question mark over the cause of the character’s plight remains throughout, however, and this lack of a satisfying resolution may hamper the film’s chances of moving beyond festival curio status.

The first character we meet is Azadeh (Azadeh Mirzaei), the capable assistant director who is tasked with marshalling the company members and chiding them for lateness. In this production, there are two actors playing Lady Macbeth: Tata (Tahere Hezaveh) is performing the role in Farsi; Marene (Marene Van Holk), who is also the Dutch-born wife of the director, tackles the role in English. It soon becomes clear that the froideur between them runs deeper than mere professional rivalry.

The reason for this smouldering animosity is explored in deftly staged flashbacks — while the shot is continuous, the timeline is not. This is elegantly handled — the film’s setting, which consists of the roof terrace and rooms of Arvand and Marene’s well-appointed Tehran home, remains more or less the same, but the emotional tone of each scene varies dramatically, reflected in the sparse strings on the score and the mercurial shifts in the performances.

Each character has their own hint of a subplot, some of which are examined in more depth than others. Meysam, the temperamental star who is cast as Macbeth, is not-so-subtly pursuing a romantic interest in Tata. He seems to be the main target of Arvand’s criticisms — the director derisively compares him to Alain Delon — a fact which is not unrelated to his own relationship with Tata. Marene, meanwhile, is feeling increasingly isolated as a foreign woman living in Iran, and the communication breakdown with her husband is not helping matters.

And then there’s the sense that, as theatre professionals in Iran, the members of the group are not always embraced by broader society. One young woman is on borrowed time with the company as her father has vetoed future involvement. And when, following the discovery of the unconscious individual, someone suggests that the police should be called, there’s a palpable fear in the room. This, together with the decision to leave the various story threads hanging, combines to create a feeling that things are about to get a whole lot more complicated for the embattled members of the theatre troupe.