‘The Art Of Racing In The Rain’: Review 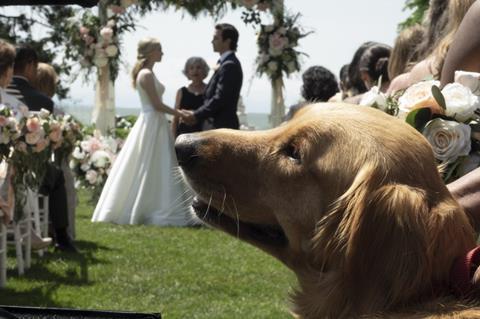 ‘The Art Of Racing In The Rain’

Racing cars is metaphor for life in The Art Of Racing In The Rain, a touching tearjerker that — as the film’s narrator might put it — doesn’t do enough to adjust to the hairpin turns in the road. A tale of a man and the loyal golden retriever who is always by his side — and also relaying the story as it unfolds — this adaptation of the Garth Stein novel is best when it gently and intelligently probes the hardships that everyone must face. Unfortunately, director Simon Curtis starts to pile on the melodramatic plot twists, robbing the narrative of emotional honesty. Some heartfelt performances and an adorable dog aren’t quite enough to combat the sentimentality and contrivances that follow.

In an odd way, Racing In The Rain could almost be the Wings Of Desire of dog films

Hitting theatres on August 9 in the UK and US, Racing In The Rain will be catnip to dog lovers, as well as fans of Stein’s book. The film boasts a cast that includes Milo Ventimiglia, Amanda Seyfried and (as the voice of the kindly pooch) Kevin Costner, and those simply wanting an uncomplicated cry will probably be satisfied. But with summer quickly fading, Racing In The Rain may have less of an impact in theatrical than it will as a small-screen rental.

Enzo (voiced by Costner) is looking back on his life, explaining to us through voiceover how he was adopted by Seattle racer Denny (Ventimiglia) as a puppy, quickly becoming his master’s best friend. But soon, Denny falls in love with a teacher, Eve (Seyfried), and they start a family, although Enzo remains central to Denny’s world — especially once difficult circumstances present themselves.

Curtis (My Week With Marilyn) drapes the film in a wistful tone, letting Enzo’s perspective on these events be our entryway into the story. Costner’s gravitas ensures that the dog isn’t some cutesy rascal or hyperactive pup but, rather, an old soul with a melancholy, philosophical bent. Racing In The Rain earns its pathos when acknowledging the poignancy of a narrator who can only observe but rarely influence what’s occurring around him. In an odd way, Racing In The Rain could almost be the Wings Of Desire of dog films: Enzo is an outsider who wishes he had the ability to interact in a more meaningful way with the humans he adores.

Denny longs to be a Formula One racer, competing in local meets in the hopes of one day getting his shot. And because Enzo shares his master’s love of the sport, the dog often invokes race-car wisdom as an analogy for what happens in Denny and Eve’s life. But the straining for profundity becomes too much after a while: just about nothing happens in Racing In The Rain without Enzo (or Denny) comparing it to some aspect of driving, a conceit that proves less interesting the more it’s utilised.

And while it’s understandable that a film like Racing In The Rain will throw emotional haymakers at the audience — this is the sort of film that, when a character develops a cough, a serious health scare is imminent — Curtis and screenwriter Mark Bomback have trouble selling some absurd character beats that artificially raise the stakes. Martin Donovan is saddled playing Eve’s rich, snobby father who doesn’t care for working-class Denny, providing the film with an easy, broad villain who acts in an increasingly unreasonable manner. What starts out as a modest paean to the circle of life eventually devolves into a custody battle and a courtroom drama, which feel phoney and overblown in relation to the film’s understated earlier sections.

Ventimiglia is solid as the noble, sensitive good guy, and likewise Seyfried is appealing as the blandly supportive wife cheering on her husband’s dream. Costner tends towards the one-dimensional in his portrayal of Enzo, failing to give the character the sly humour that his dialogue sometimes suggests. But as Zoë, Denny and Eve’s young daughter, Ryan Kiera Armstrong acquits herself nicely, handling the story’s melodramatic flourishes with little trouble.

Then there are the two golden retrievers that play Enzo. Credit Curtis and the animal trainers for resisting the urge to make their canine protagonist too precious or mawkish. Instead of being anthropomorphsed by the filmmakers, Enzo is a quiet, reflective presence, taking in everything around him in the hopes of a better understanding of people. He’s such a sage dog one wonders why he wasn’t given a chance to punch up the script.

Screenplay: Mark Bomback, based on the novel by Garth Stein