‘The Belly Of The Mountain’: Visions du Reel Review 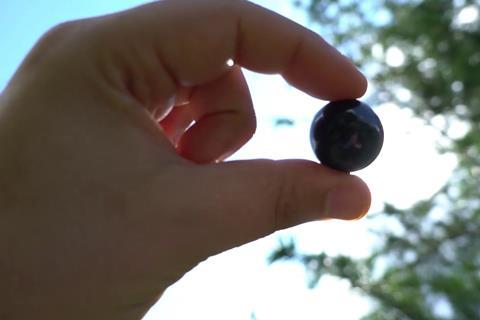 ‘The Belly Of The Mountain’

French essay film The Belly Of The Mountain takes a very personal approach to a recent tragedy — the crash of a Germanwings commercial flight in the French Alps in March 2013, deliberately caused by its co-pilot. Filmmaker Stephen Loye — working in tandem with ‘sound anthropologist’ Patrick Romieu — offers anything but a conventional journalistic account of the case. While it does supply a substantial amount of hard information, this impressionistic work is more interested in conveying the event’s meaning for the community of this Alpine region, including Loye himself. In turns inventive, elusive and frustrating, the film premieres in the Burning Lights Competition of Visions du Reel, after which it is most likely to inhabit the specialised realm of experimental documentary/essay outlets, and the art circuit where cross-disciplinary artist Loye is generally active.

Loye focuses on the human reality for locals

End credits identify this both as a film by Loye and as an ‘ethnographic investigation’ by Romieu. Loye weaves together a set of sound interviews with locals from the villages of Prads-Haute-Bleone and Le Vernet; TV news reports about the crash and subsequent press conferences; and video footage showing the local landscape, as well as glimpses of Loye’s daily environment. One of the most striking sections comes near the start — a CGI sequence showing a routine Germanwings flight in progress, but then depicting panic as the pilot, briefly absent from the cockpit of the Airbus A320, is unable to regain entry, locked out by co-pilot Andreas Lubitz. (Ironically, we learn that it was in the wake of 9/11 that cockpits were made impregnable to enhance security.) Also from a press source, this makes for an attention-grabbing moment of strangeness, especially set to an early music chorale. (Other music used includes the Congolese ‘Missa Luba’ and the director’s own compositions, credited to White Mountain.)

Further information comes partly in news clips from a variety of TV sources. The crash — bringing crowds of specialist investigators and international journalists, as well as France’s then-president Francois Hollande — turns the area, someone comments, “into a different planet”, transforming a quiet region that “seems like heaven”. (Footage does indeed suggest an archetypal Alpine idyll, complete with grazing cows.) Images stamped ‘Ministry of the Interior’ show the crash site with the plane reduced to scattered debris, while information gradually emerges about Lubitz himself. Initially it seems that a dearth of information distinguishes him from the perpetrator of the 2011 Oslo massacre Anders Breivik, who minutely documented his far-right motivations; by contrast, little clarifies Lubitz’s state of mind, until we hear a letter to his doctor regarding his sight and sleep issues.

A disturbing thread involves the corporate airline industry: a brusque refusal by two high-ups from Germanwings parent company Lufthansa to answer questions, and figures about passenger insurance and the value of human life internationally, with shocking disparities based on race and geography.

Beyond these facts, Loye focuses on the human reality for locals — for example, the official who had to sign death certificates for all 149 of Lubitz’s victims, including a baby. Among other voices from the region, we hear an Argentinian woman who recounts her own tragic experience, and a woman originally from Northern France who says that moving to the Alps felt as if the earth’s geological strata were turned upside down.

At one point, as Loye recalls earlier disasters, we see a Tintin comic flicked through on screen. While this might momentarily seem incongruous or facetious, the reference is to a plane crash episode in Tintin In Tibet containing the only moment at which Herge’s hero is ever shown crying. This associative sidestep briefly echoes the digressive chains of ideas specialised in by Chilean documentarist Patricio Guzman (Nostalgia For The Light); but despite flashes of that lateral thinking here, it isn’t sustained in a way that might have yielded richer insights.

As it is, Loye doesn’t entirely convince in his emphasis on the everyday. He succeeds in evoking the region as a lived environment in sequences such as an extended shot of a drive on a winding downhill road. But the film is less evocative (and certainly less visually interesting) in its images of quotidian domesticity: coffee cups, gardens, a loudly purring cat (possibly a nod to the feline fixations of Chris Marker, who may well be a guiding influence on the film).

Loye’s more philosophical musings — delivered in a solemn voiceover style that has been a staple trope of French cinema since the 50s — don’t always connect. At the beginning, at their most abstract, his thoughts accompany images of a black marble that, seen again at the end, reveals itself as an embodiment of death. Death, we’re told, says, “Those who look me in the eye can start living at last”, and Loye’s film is a serious attempt to do just that, an act of memorialisation and catharsis. But while this intriguing collage film clearly aims to avoid the pitfalls of more traditional reportage, Loye’s diffuse approach ultimately detracts from looking at this particular tragedy with quite as much hard clarity as it perhaps demands.