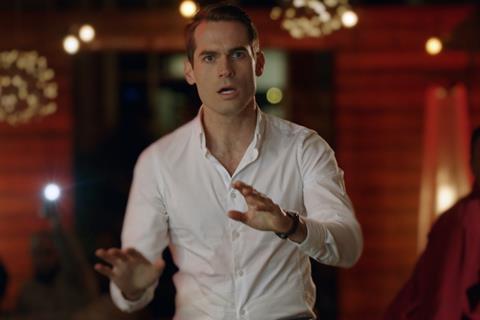 The life of a soon-to-be-married Hollywood talent agent (played by co-writer and -director Jim Cummings) unravels after he accepts an invitation to a hotel room for anonymous, no-strings sex with “an admirer”. This enjoyably lurid techno-thriller flirts with horror tropes and certainly amasses a respectable body count — a body count which is not entirely justified by the material. But the real savagery is reserved for the movie industry: it’s a brutally unflattering satire which wields its humour of discomfort like a scalpel.

There’s plenty of gleefully mean-spirited fun to be had here, preferably in a cinema and shared with as large and as vocal an audience as is legally permitted

It’s the third picture from Cummings, whose debut, Thunder Road, won the Grand Jury Award at SXSW. Here, he shares directing duties with PJ McCabe for the first time. Following on from its world premiere in Berlin’s official selection (where it was not shown to press), The Beta Test makes its US debut in Tribeca, having already secured sales in several territories, including IFC in the US. The picture’s rattling, nervy energy and knowing Hollywood in-jokes should recommend it to further festivals, where it could chime with genre audiences in Midnight strands. It’s not a film which entirely holds up to scrutiny — the numerous murders, for example, are included for gory punctuation rather than as credible plot points — but there’s plenty of gleefully mean-spirited fun to be had here, preferably in a cinema and shared with as large and as vocal an audience as is legally permitted.

Cummings plays Jordan, a slick Ken doll of a man with a smile which is equal parts mania, desperation and dental veneers. On the surface, he’s a Hollywood success story — a top tier agent at A.P.E., and a key player in the company’s aggressive move into ‘packaging deals’ (“a term you made up to steal our money,” says one potential client). He has a beautiful fiancee (Virginia Newcomb) and a generous expense account. But Jordan’s identity is all about surface, and under the carefully maintained patina of enthusiasm is a seething, paranoid man whose positive spins of “I’m excited!” sound increasingly demented, and who privately mourns the end of the Weinstein era.

The veneer starts to crack when Jordan receives a purple envelope inviting him to a mysterious hotel room hook-up. Even before he takes the bait, the mystery woman becomes a third wheel in his relationship, and the question mark of her identity hangs over every encounter with every woman. Meanwhile, subplots following other letter recipients seem to invariably end with violent death at the hands of their cuckolded spouses.

With its weaponised cynicism, outlandish movie pitches (“we’re rebooting Caddyshack, with dogs”) and undercurrent of violence, the film feels like a bratty, delinquent little sister to Altman’s The Player. And in common with that film, it’s the malicious momentum of its depiction of an industry insider falling from grace which makes it compulsive, rather than the crime element. The third-act reveal of the truth behind the purple envelopes lacks the punch of earlier scenes, but the bombast of a bastardised classical score and Cummings’ clenched and venomous depiction of a corrupted Hollywood ego powers the film past any lingering questions of plot credibility.