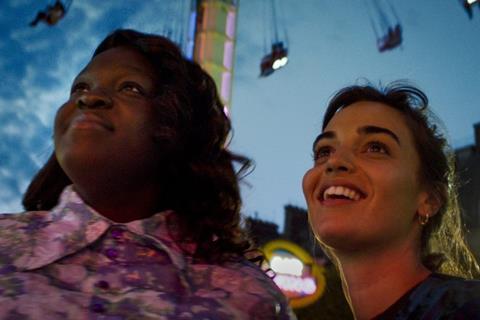 Never underestimate the appeal of a well-executed weepie. No heartstring is left untugged by The Braves (Entre les vagues). Anais Volpe’s debut feature celebrates a female friendship as it runs the gamut from jubilation to lamentation. The initial exuberance darkens into a persuasively acted, striking-looking tearjerker that should have commercial potential in the domestic market and perhaps beyond.

As the pitch veers towards the overwrought, the constant tears in the eyes are not necessarily matched by the tears of the viewer.

Dedicated to Akela and “my girlfriends and my sisters”, The Braves is all fun and games in the first third as Volpe establishes the tight bond between Alma (Deborah Lukumuena from Divines) and Margot (Souhelia Yacoub). Alma is a nail technician and Margot has waited on tables in a dozen different cafes; they are both convinced that their star potential just needs the right opportunity to shine.

The fearless, fun-loving friends are first seen at an overheated audition where their apparent rivalry has gone a step too far. It has all been staged to attract the eye of the director, but seems typical of their behaviour. Role-playing is a significant element of their friendship as they blithely gatecrash a wedding or confront Margot’s former lover and his wife with a child they claim to be his.

There is an energetic exuberance to the early stages of The Braves that is hard to resist. Prolific cinematographer Sean Price Williams (Good Time, Her Smell, etc) lends the film the grainy look and textures we might associate with classic American films of the 1970s. The restless camerawork captures the tireless energy of the two twentysomething women. The images of city streets and after hours antics have a warm urban glow.

The big break comes when Alma lands the lead role in the play and Margot is hired as her understudy. We are soon immersed in the world of the theatre; the rehearsals, the backstage camaraderie, the way a performance is developed and shaped by a director.  The film reveals affinities with great theatre movies like John Cassavetes Opening Night, and All About Eve. You assume the name Margot is in tribute to Bette Davis’ Margot Channing.

Things change once again with the discovery that Alma is seriously ill. The film veers into Beaches territory as Margot faces the challenge of replacing her best friend whilst trying to sustain the illusion that this is just a temporary situation. The show must go on becomes the prevailing ethos.

Both lead performers bring a charismatic presence to The Braves, although there is a slight feeling of resentment that the film becomes ’All About Margot’. Alma’s illness is the key to much of what happens but it is mostly seen through Margot’s reactions; her guilt, her grief, her anger at the injustice of it all and the solace she takes from a budding relationship with a fellow actor.

Yacoub is a match for the emotional demands of the role but, as the pitch veers towards the overwrought, the constant tears in her eyes are not necessarily matched by the tears of the viewer. Tipping the balance of the story towards Margot does short change Lukumuena and Alma in a film that still emerges as a fond remembrance of a cherished friendship.