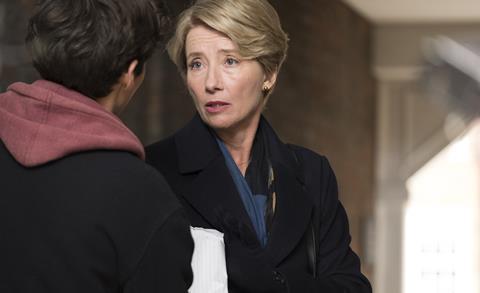 Emma Thompson loses herself in The Children Act, subsuming all her natural lightness to embody one of novelist Ian McEwan’s more fascinating characters, a High Court judge charged with implementing the titular Children Act in family court. When the remote, humane, but unheedingly autocratic Justice Maye slips and allows herself to connect on a human level with one of her cases, tiny cracks form at the edge of her carefully controlled existence, and threaten to shatter it.

There’s the sense that Thompson is is relishing this rare opportunity to present the audience with a complex, intelligent, and commanding woman of a certain age, and never lets her character down

Director Richard Eyre has guided Thompson to an exceptional performance in McEwan’s elegant adaptation of his own book (his second to bow at Toronto 2017, after On Chesil Beach), and she will undoubtedly be recognised for her most engrossing work since Remains Of The Day. Her gifted young co-star Fionn Whitehead’s recent exposure in Dunkirk will also help draw attention to this cerebral piece about a complex, mature woman of power. Eyre takes his cues from the formal, almost anachronistic environment in which Justice Maye works at the Royal Courts of Justice, presenting a restrained, tasteful piece which, while it may be too classical for wide consumption, will draw many admirers.

The recent case of baby Charlie Gard in the UK, whose parents came to legal blows with the hospital over his treatment, lends a strong resonance at the outset to The Children Act. While, as she clearly indicates, the law is paramount in her family court and the 1989 Children Act holds the welfare of the child to be paramount in all cases, Justice Fiona Maye is very much human, and the unthinkable decisions she has to make on a day-to-day basis are taking their toll. The biggest casualty is her marriage to Jack (Stanley Tucci). The judgement, for example, to separate conjoined twins, condemning one to a certain death, can only be made if she holds her emotions constantly in check, but that means her relationship, which is ironically childless, is dry and crumbling.

When Jack announces he’s about to embark on an affair, and the controlling Fiona tells him to leave their home and changes the locks – even though it’s far from clear that’s what she wants – the emotional turmoil opens her up to making a rare misstep in court. She arbitrarily decides to visit a young patient in hospital. Adam (Fionn Whitehead), just shy of 18 years-old, has leukemia and has decided, as a Jehovah’s Witness, not to receive a life-saving blood transfusion. His devout parents support his actions, and the hospital has come to court looking for a decision.

Whitehead, an innately talented actor, conveys the febrile anxiety of a bright boy who is aflame with noble desires. Justice Maye’s visit – when she sings ’Down By The Salley Gardens’ to the patient – changes his life and re-directs his zeal, but it also alters hers, and in a painful way, jolting her back into an unwelcome human connection which can’t be easily managed. Surrounded by the symbols and customs of the ancient courts, Justice Maye has forgotten what real life, and death, are all about.

Thompson subsumes herself in the role, donning the Justice’s armour of black working clothes, heels, and a raincoat as she discreetly goes about her business. There’s the sense that the actress is relishing this rare opportunity to present the audience with a complex, intelligent, and commanding woman of a certain age, and never lets her character down. Set in and around London’s somewhat rarified courts of law, this is a film which focuses on script and performances, as opposed to bravura visual statements. Bach and Beethoven dot the piece – Justice Maye is an enthusiastic amateur pianist – and the milieu can feel appropriately stuffy and claustrophobic (The Children Act shot on location in London and in and around the Royal Courts of Justice).

Like last year’s Denial, which also premiered in  Toronto, this is a courtroom drama, but one which slides the focus off the case and onto the human making the decisions in a situation which is endlessly slippery. The Children Act is a cerebral piece, for sure, and a disturbing one by the end, but Thompson’s performance brings life to the complex moral questions it attempts to examine.

Screenplay: Ian McEwan, from his novel