'The Closer We Get': Review 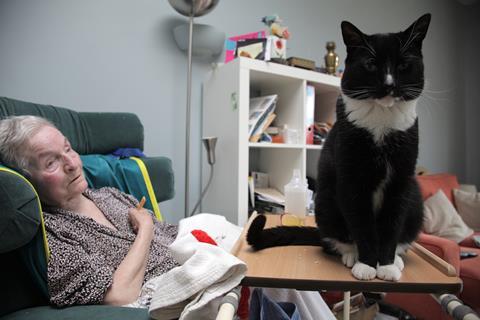 “All happy families are alike,” Anna Karenina famously begins. “Every unhappy family is unhappy in its own way.” Documentary filmmaker Karen Guthrie (Living With The Tudors) offers a quietly affecting portrait of her own conflicted clan, skilfully weaving in a fair few surprises that come courtesy of its stubbornly wayward patriarch Ian. Years in the making, this heartfelt film already scooped the Best International Feature Documentary Award at Toronto’s Hot Docs in May, and now lands on home turf in Edinburgh. Further fest action is assured; theatrical exploitation, in today’s ever more crowded marketplace, looks a challenge.

Guthrie’s own relentlessly sensitive narration illuminates, even if finally what is revealed is a family that – happy or otherwise – is more relatable than remarkable.

Guthrie was only a few weeks into filming a portrait of her family when mother Ann suffered a severe stroke that left her immobile. But The Closer We Get begins five years later, with Ian and Ann just a year shy of their 50th wedding anniversary – if they’d actually stayed married, that is. It turns out that this average-seeming elderly couple, who live near Glasgow with one of their four adult children, have a few complications in their back story, including a divorce, a ten-year spell in the Horn of Africa for accountant Ian, and a mixed-race son, Campbell, whose existence Ian kept secret from his wife for five years. (Now also an adult, Campbell lives nearby.)

The making of the film is an acknowledged act of catharsis for the director, as she probes the character traits she inherited from her parents. As a child, Karen was labeled the contrary misfit of the sibling quartet, and it was only when the sober-seeming Ian suddenly relocated to Africa that it became evident that he, too, dreamed of escape.

A querulous and evidently reluctant participant, Ian emerges as the star of the piece, a contradictory figure who has moved back in with Ann to help with the caregiving, despatched with his trademark insensitivity. Condescending entitlement is his default setting; self-knowledge a distant stranger; geniality his disarming endearment. He remains entirely unguessable, and his seemingly impulsive behaviour hands the film a neat final-act twist when he travels to Ethiopia for a two-week holiday, and makes one more life-changing decision.

Despite a steady diet of small revelations – brother Mark, for example, whose presence in the household suggests his life hasn’t turned out quite the way he’d intended, is suddenly announced as the former member of an indie pop band that had five UK Top 40 hits – The Closer We Get risks appearing to audiences as rather small beer. Grey Gardens and Capturing The Friedmans have set the bar rather high for portraits of familial eccentricity and sensational events, while Sarah Polley’s Stories We Tell had the virtue of a previously known name allied to particularly artful intrigue. Guthrie’s own relentlessly sensitive narration illuminates, even if finally what is revealed is a family that – happy or otherwise – is more relatable than remarkable. Surely that’s the point, but it’s not much of a marketing hook.