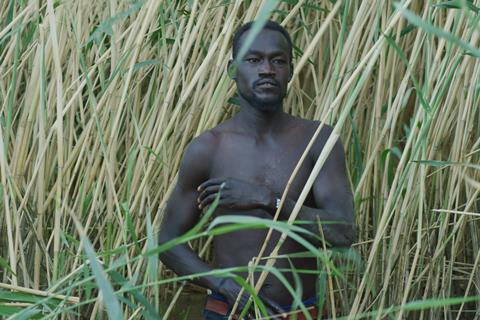 A Sudanese brick-maker reclaims a spiritual connection with the land by building a giant mud monster, in this oblique, allegorical tale. The story unfolds on the banks of a river which has been blocked by a massive, disruptive dam – a symbolic presence as well as an aggressively solid physical one. Elsewhere, the Sudanese people rise up in protest against the dictatorship of Omar Al-Bashir, until the army intervenes to overthrow him, cutting short the popular revolt. It’s a poetic picture which combines a dispassionate account of the lives of the brick-makers with a dash of magical realism. The film’s enigmatic approach and its measured pacing might limit the film’s appeal to the more adventurous corners of the festival circuit.

The sound of the water, gushing from the open pipes on the side of the dam, is a constant, a roar of displeasure

The Dam is the first feature film from Beirut-born, Paris-based visual artist and filmmaker Ali Cherri. It is the third part of a trilogy of works, the other two being the short films, The Digger and The Disquiet, which have been shown in numerous festivals, including Toronto, Rotterdam and CPH:DOX. The three films are linked by a theme that Cherri describes as “the geography of violence” - exploring how social and political crises become in some way embedded in the lands on which they unfold. Cherri’s background in conceptual art is very evident in his approach to filmmaking and will likely dictate the kinds of events which will respond to his singular and striking vision.

Cherri eases us into the atmosphere of the film before he approaches the story itself. In the shadow of the Merowe Dam, which was built by a Chinese company in North Sudan, a group of men toil in the mud. It’s not at first clear who we are following. Cherri creates an abstraction of body parts – shins crusted with dried mud, hands roughened by daily contact with the earth and the sun. Then, as the other men bathe in the waters near the dam, one sits alone, talking to a loved one by phone. He is Maher (Maher El Khair, like all of the cast, a non-professional actor who is a brick-maker in real life). Despite encouragement from the men, Maher refuses to join them in the water for fear of the strong currents which result when the gates of the dam are open. The sound of the water, gushing from the open pipes on the side of the dam, is a constant, a roar of displeasure which sounds as though it bursts out from the interior of the earth below. The score incorporates this rumble into a sparse, pulsing, brooding musical accompaniment.

Maher begs the loan of a motorbike for a couple of hours, something that he has been doing on a regular basis, much to the annoyance of the bike’s owner. When he gets to his destination, Cherri prolongs the sense of mystery with a lovely shot of Maher’s shadow, in sharp resolution on the sand, as he works on a large structure in the middle of nowhere. The structure, it subsequently becomes clear, is a rough figure, with spindly branches for arms and hollow eyes – like an African version of Golem of Jewish tradition. As the energy of rebellion spreads through the country, so the thing comes to life. But its sentience is short-lived and its destruction coincides with the quashing of protests by the military. But just as the protestors are empowered by their activism, Maher is changed by the creation of his mud idol; he is left with a destructive power which claims the life of a dog in one of the film’s less relatable moments.