'The Death Of Louis XIV': Review 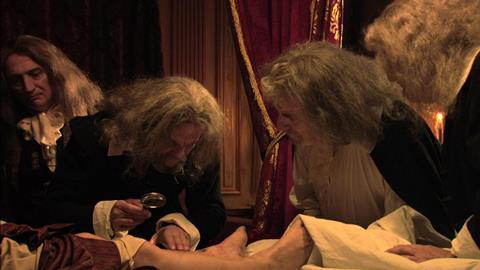 A monarch’s devotion to duty and service endures until the last breath in The Death Of Louis XIV, a painstakingly realised portrait of the agonising final days of the Sun King. Based on extensive medical records and the memoirs of the Duke of Saint-Simon and other courtiers, Catalan director Albert Serra’s film has a documentary-like authenticity, matching the unblinking instincts of a modern reality television series with the visual allure of the old masters.

Serra has found his perfect Louis in Jean-Pierre Leaud.

A perfectly-judged central performance from nouvelle vague veteran Jean-Pierre Leaud adds to the film’s appeal, although the subject matter and sombre approach hardly scream commercial juggernaut. In regal cinematic terms this is more of a companion piece to Roberto Rossellini’s The Rise Of Louis XIV (1966) than a crowd-pleaser like the Alan Bennett-scripted The Madness Of King George (1994).The film’s formal rigour and the presence of Leaud should still be sufficient to endear it to significant numbers of hardcore art house enthusiasts and history buffs.

At the court of Louis XIV (Leaud), there is no such thing as privacy. Everything the King says and does is a matter of public record and frequently witnessed by the Royal household. Any loss of appetite or sign of vigour is considered an omen. Crowned King in 1643, Louis’s reign is the longest of any European monarch. The film begins in 1715 as the aged King suffers horrible pains in his left leg and is confined to bed.

Royal obligations continue as a group of doctors, including Fagon (Patrick D’Assumcao), seek a remedy in a change of diet, the consumption of donkey’s milk, recourse to bleeding and other futile suggestions. Gangrene sets in and the leg turns black. It becomes apparent that the situation is hopeless and that the King must prepare for death, leaving instructions for what is to happen to his organs and the question of succession.

It is the attention to detail and the refusal to compromise that allows Serra to create such a compelling, coherent vision. The film unfolds entirely within the treacly darkness of the King’s chambers. Candles provide the only points of light in a life that has literally retreated into the shadows as the disease advances like a conquering army. Cinematographer Jonathan Ricquebourg creates a visual look that echoes paintings by Holbein or Hogarth.

Working with professional actors for the first time, Serra has also found his perfect Louis in Jean-Pierre Leaud. The make-up department do a fantastic job of creating a sickly pallor and Leaud is also given a spectacular plummage of frizzy gray hair that resembles two poodles fighting over a bone. Leaud plays with a weary indomitability, determined to carry on, gracious and dignified in his terrible suffering. The attention to detail extends to his performance with barely glimpsed grimaces of pain, the discomfort of swallowing, faraway looks and sudden moments of fierce concentration all building the impression of a great force fading away. It is easily the actor’s best role and most noteworthy performance in some time.