‘The Elegy Of Laurel’: Sarajevo Review 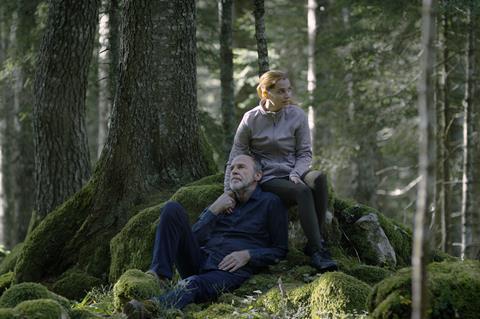 A film’s opening and closing shots can often be so striking that mis-steps which transpire between them can be forgiven. Such is the case with The Elegy Of Laurel (Elegija Lovora), an ambitious and largely accomplished fiction-feature debut by Montenegro’s writer-director Dusan Kasalica. World premiering in the main Competition at Sarajevo — where Kasalica’s A Matter of Will won the shorts section in 2015 — this two-part character-study of a middle-aged professor in crisis wears its Ingmar Bergman influences rather prominently on its well-tailored sleeve. The director’s respectful and intelligent nods to the Swedish maestro could boost subsequent festival prospects, though, rather than diminish them.

This is very much a work of two halves, the carefully poised realism of the first section yielding to quasi-hallucinatory explorations

Musician/actor Frano Lasic plays Filip, an urbane intellectual of considerable prickly self-regard who lectures on the history of the Balkan countries. The story begins with Filip arriving at a spa located in a deeply forested, scenic spot near the coast, in the semi-relucant company of his wife Katarina (Savina Gersak). While the duo — who have a grown-up daughter back home in the city — still enjoy occasional physical intimacy, scenes from this marriage indicate that all is far from well.

Thus it comes as no great surprise when, before the half-hour mark, Katarina announces that she is leaving her husband (and, apart from one brief scene, the film itself). The focus, having up to this point been fairly equally split between the couple — in sequences which evoke the limbo status of spa resorts via sharply observed, drily amusing vignettes — now shifts firmly to Filip. After a brief trip to his city-centre apartment, he drives to his family’s rural villa where events take metaphysical, even magical-realist turns.

Walking in the nearby woods, Filip meets an extravagantly behorned, semi-tame billy-goat. This spectacular creature serves as mute conduit to a realm of low-key fantasy: an orange-hued snake first communicates with Filip telepathically, then takes the form of a young woman clad in modern walking gear (Lidija Kordic). Next Filip’s mother (Draginja Voganjac) materialises, looking no older than her ageing offspring; these two female presences do not get along; Filip finds himself caught in the middle of their enigmatic feud.

This is very much a work of two halves, the carefully poised realism of the first section yielding to quasi-hallucinatory explorations of Filip’s inner life. Kasalica has cited Croatian fairytales and stories by Nikolai Gogol as inspiration, while the protagonists himself recounts the myth of Apollo and Daphne that provides the picture with its classical title. Such references sow the seeds for the midpoint switch of register which is unfussily and fluently handled, but may cut many viewers adrift.

Filip is hardly the most engaging or sympathetic of characters to begin with, and the film’s extended probing of his memories, insecurities and fanciful imaginings smacks a little of self-indulgence (while also installing Andrei Tarkovsky alongside Bergman in the pantheon of greats to whom Kasalica seeks to pay dutiful homage.)

As a scripwriter, Kasalica clearly has no shortage of ideas and original conceptions, but he still feels some way from the finished article. As the director, he has delivered a calm and rather slow film that avoids the pitfalls of slow cinema.  That first shot — a two-minute image of the sky seen through an oval cave-mouth, is a quietly stunning curtain-raiser. Its climactic counterpart, meanwhile, fills the screen with the giant head of a lion, as witnessed by Filip on an LCD display-screen. Branislav Jovancevic’s surging score, previously kept in check, now pulsates with propulsive energy; Kasalica’s final cut-to-black is perfectly timed for maximum impact.

Working in widescreen, cinematographer Igor Djordjevic does full justice to the varied glories of Montenegro’s landscapes throughout, often emphasising their Scandinavian aspects)