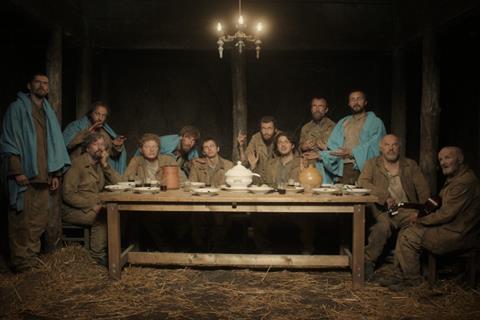 The fog of war proves messily murky in The Flood Won’t Come (Tvano Nebus), a belated and only fitfully promising fiction-feature debut from Armenian writer-director Marat Sargsyan. Anchored by the doughty underplaying of veteran Valentinas Masalskis as a world-weary colonel embroiled in civil war in an unspecified European country, this Lithuanian production comprises a series of semi-connected fragments which never click into a satisfying rhythm.

It doesn’t help that the story has a fable-like air, with any geographical or chronological signifiers deliberately and frustratingly withheld

Premiering in Venice Critcs’ Week, The Flood Won’t Come now shows at Transilvania. When Sargsyan (whose previous credit was 2012’s hour-long documentary Father) aims for a directorial flourish the results can be quite impressive, including the deceptive, rather majestic opening featuring a gliding drone-camera making stately progress through what looks like a CGI version of the Himalayas. Feliksas Abrukauskas’ cinematography catches the eye here; likewise considerably later when the colonel’s nocturnal encounter with his similarly grizzled opposite number in a forest clearing is presented via a monochrome night-vision filter.

Its most effective scenes tend to be the shorter ones: strange, gnomic vignettes conveying the grim, tedious randomness of war. The presence of three credited editors is something of a red flag here: the director shares cutting duties with Jan De Coster and Ieva Vieveryte, the latter also responsible for Laila Pakalniņa’s significantly superior Latvian genre-bender In The Mirror, also playing on the festival circuit at the moment.

When sequences are extended, the law of diminishing returns applies. The most taxing examples of this are the segments dealing with civilian POWs held captive in a barn, which fit awkwardly alongside the rest of the narrative. These scenes take place in a dimly-illuminated indoor space rather than villages and countryside; the characters are dressed in bygone, 1940s-style attire, in contrast to the military personnel who are unambiguously contemporary (smartphones abound). The handling of the performers during the POW interludes is leaden, imparting a decidedly theatrical air to proceedings; the conclusion of their imaginary “feast,” visually nodding towards The Last Supper, feels both forced and hackneyed.

There are flashes of inspiration here and there, including a strikingly realistic bomb assault on a building very early on presented from the perspective of its inhabitants. Such dramatic touches convey the familiar war-is-hell theme with a measure of success, but aren’t integrated into a properly coherent overall narrative scheme. It doesn’t help that the story has a fable-like air, with any geographical or chronological signifiers deliberately and frustratingly withheld – presumably with the intention of making universally applicable statements about the futility and cruelty of armed combat.

Rather than reaching a climax The Flood Won’t Come dribbles out its extended finale. We see the colonel apparently shot dead by a forest sniper (presumably a dream or hallucination); in the next scene he’s up and around, and heads home via foot and public transport — through a city whose everyday calm seems somewhat surreal in the wake of the war-torn countryside seen earlier. The television in his humdrum flat relays what is supposed to be clandestinely-shot footage of atrocities from the civil war, which we recognise as extracts from the film itself. Not for the first time here, the impact of this concluding episode is muted — its literal and metaphorical meanings frustratingly nebulous.